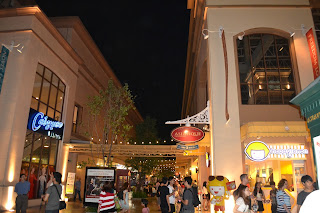 To our surprise our ‘expert’ friend was in the room; we paid for our room and went up the stairs (2 people per room); no elevator here. For baggage they had a large mechanical cage where they placed the bags and sent it up to our floor. The room was small but cozy – two beds, one tv, one small fridge, an ac and a small attached bathroom with shower. There was also a little balcony. I was happy that it was clean and there were no signs of insects – in some hotels we had read reviews warning us about bed bugs; quite a torture they can be. I jumped into the shower and struggled with the hot water; in the end only managed to get warm water.

By 7pm, all four of us were fresh after a nap. Our ‘expert’ was no longer sick – he felt fresh.
“The medicine he gave is great,” he said referring to the Thai pharmacist who prescribed a bunch of tablets.
“And I got my sunglasses. The pharmacist kept it in the front; as soon as I entered I saw it.”
I had heard that Thai people are honest. Sometime later, we were out on the street. We went to the main road and decided to take a cab to Asiatique mall. It was dark and there were cars whizzing by the main road. We tried to flag down a few but no one stopped. We then crossed the road and tried from the other side because we saw a few people get cabs there. Communication was a problem. And the bigger problem was that we hadn’t checked how far Asiatique was from our place.

Finally we did get a cab and the driver did understand Asiatique. After a little price haggling we settled on 200 Bahts. What we had read was to always ask the driver to put the meter and never set a price. But having struggled to even stop one cab, and running out of time, we went against the principle.
The drive was a long one and I was unfortunately stuck in the front seat beside the driver, on his left.

This guy wasn’t too friendly and unfortunately he spoke some English. He asked how long we are here and tried to zero in on the hotel we were staying at but we evaded that question. We were getting suspicious of the guy. He said he’ll take us to Pattaya whenever we wanted and quoted 1800 Baht. That was way too high and that too without the toll fee. He kept arguing and was adamant to strike a deal. He tried negotiating and then when we mentioned bus, he said buses will cost more.
“I take you to bus station. You ask.” 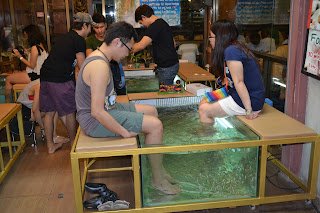 I decided to switch off speaking and just waved away all subsequent offers. He was getting hot by the minute; I knew his temper was rising from his voice. He made a call on his mobile and started narrating something about us and referred quite often to ‘Indians’. For a minute I wondered if he would set us up to get mugged! But then Thailand is supposed to be tourist friendly and we were glad to see the Asiatique signboard. Phew; we jumped off after paying him his fare but he still kept cursing us.

(Pic on right - a fish spa; for a change fish eat humans!)
Posted by Unknown at 9:15 PM No comments: 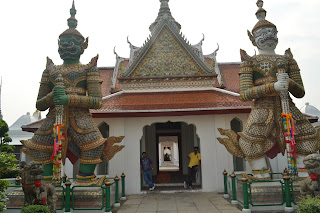 Wat Arun (also called Temple of the Dawn) is relatively small compared to Wat Pho. This one goes vertically upwards. There are 2 guardian statutes facing outwards (unlike the Emerald Temple where they face inwards); again the guardians are based on Ramayana. And I read that the name Arun itself comes from the god Aruna (brother of the Garuda).
(Pic on left: Temple Guardians)
There are three flights of stairs to climb. The first set of stairs are not very steep; the second set is medium and the last set to go to the top is the steepest; it feels almost like climbing up a ladder. Small kids and elderly people probably won’t be able to make it to the top. And when you climb such steep steps you always have the fear of ‘what if someone climbing ahead slips’! At each level you can go around the structure but the area keeps narrowing down because the whole structure is like an inverted cone. Being tired, it felt great to stand on top to absorb the strong breeze. Our veggie friend with the sprained ankle didn’t want to miss this and he pushed himself to climb up and possibly worsened his foot because it was quite swollen. The height of the temple is about 60 meters.
We cautiously climbed down; some preferred going down facing outwards (back facing the stairs) while some preferred going down inwards.
You’ll find a lot of roadside food vendors in Bangkok; and for our veggie friend this was a relief because some had fruit juices and cut fruits; they cost between 10 Baht and 20 Baht. Our veggie friend had a few long pieces of green mango – that was his lunch! 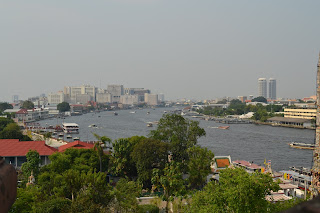 To head back to our hotel, we opted to take the bus again! We knew the numbers and so we waited at the bus stop and didn’t have to wait long. The fun was as to whether we’d know where to get off because obviously we didn’t want to rely on the conductor. And so I opened the Bangkok map (paper map) and tried to follow the route on the bus. If you spot your location correctly then you will be perfectly right while using a map else you’ll find yourself lost; today I was perfectly right. But our veggie friend and photographer also found the bus stop based on the locality.
(Pic on right: View from the top)
We wondered if our ‘expert’ friend would be in the room or if he would have left on some adventure!
Posted by Unknown at 5:44 PM No comments: 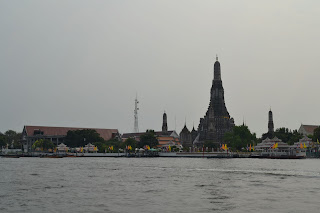 The three of us were tired when we stepped out of Wat Pho; next stop was Wat Arun. It wasn’t far away – we could see the structure but it was across the water. While we headed towards the taxi boats, we saw a group of people crowd around a showman; he was a local guy with a fat and long python around his neck. In broken English he asked people to take snaps. Some people took snaps of him with the python while one Westerner stretched his hand to hold the python. Seeing the Western man, the local guy immediately placed the python across the Western guy’s shoulders; the python stretched from the left to right of his outstretched hands. After his wife and many of the onlookers took plenty of snaps of him, the guy passed the python to the local guy, casually turned around and started walking away with his wife.

The local guy was stunned by this act; he shouted, “500 Baht,” and confronted the Western guy.

Voices rose as the tempers rose under the hot sun. I wondered if a fight would ensue; in a 1 on 1 duel, the Western guy would surely have over-powered him – he was huge compared to the local. But then there were a couple of other locals very close to the snake guy; and there was also the snake to handle!

The local guy pocketed the money and turned his attention to the crowd in the hope of attracting another customer. 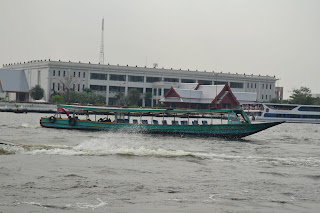 Thailand is very strict when it comes tourist related incidents; I had read that if there is a conflict between a local person and a tourist, then the police tend to favour the tourist. So if a fight had broken out, the snake guy might have had more to lose. And to be fair, he never told the cost before placing the snake.

The boat ride is very cheap; we ran across a platform built on top of wooden boards where there were many small shops. At the end, before the pier, was a small counter where a lady was collecting money for the taxi boat. The boat is medium sized; it was an enjoyable ride across – takes 5 minutes and they drop you near Wat Arun; in fact each of these boats goes only between 2 points across the lengthy water body that divides Bangkok.
Posted by Unknown at 5:11 AM No comments: 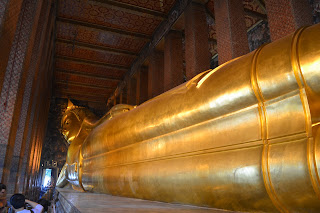 While buying the entrance ticket for Wat Pho, we saw an amusing notice board that read something like this, “Beware of pick pocketers - they are non-Thai nationals”!

Along with the entrance ticket we were entitled to a free 300 ml water bottle - it was timely for us because we were exhausted in the heat and we were happy with every single drop that we got. 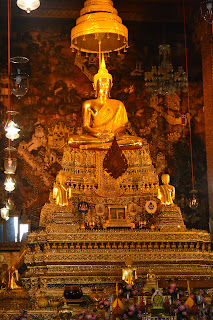 Inside the main hall, was the huge structure of the Buddha in a reclining posture (thus the name ‘Temple of the Reclining Buddha’) - 160 feet in length! The sight of massive structures tends to calm the mind - maybe because you reflect on how small you are in this huge universe. The feet of the Buddha has 108 symbols inlaid with a material called mother-of-pearl. We followed the crowd, picked a cup filled with coins from a table and dropped one coin in each of the 108 bowls that were lined up beside the Buddha.

Most people tend to leave after seeing this hall with the reclining Buddha but this temple has a lot more areas behind the main hall. In some places we saw old anatomy type drawings; we didn’t know what it meant but after looking online we learnt that this place was originally used for traditional Thai medicine and many of the diagrams are still being researched. Our veggie friend was struggling with his sprained foot which happened before our journey began; the pain and swelling increased and he was forced to sit out at this point.

A few of the temple corridors had a row of small 50 or so Buddha structures sitting in a row. As our photographer and I trudged along we came across a building that was setup similar to the Temple of the Emerald Buddha. And the sight within was just as spectacular with a golden color in the room. I don’t think the picture we took does justice to the real sight. 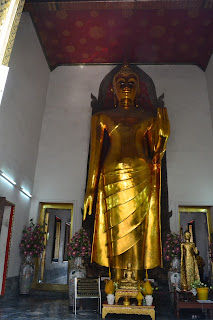 After this point our photographer friend also semi-retired; one by one we were going down - one with fever, one with sprain, one tired with the steps! To get to the main hall of each of these buildings you had to climb a few steps - it was really tough to go up and down the steps so many times.

Some of the halls didn’t have the golden tinge but just had a huge structure of the Buddha in a particular pose - lying down, standing, sitting under the Bodhi tree etc. Most of these rooms were empty since tourists hardly walked up to this point.

When you stand in an empty room with a large Buddha in front of you, there is that feeling of calmness and humbleness that automatically sets in; a feeling of awe. And that pushed me to visit as many of the halls as I could!

It feels apt to end this edition with a quote from the book ‘The Black Swan’; the author says that we are extremely lucky to be born and that we should be thankful for it.

“I am sometimes taken aback by how people can have a miserable day or get angry because they feel cheated by a bad meal, cold coffee, a social rebuff, or a rude reception… We are quick to forget that just being alive is an extraordinary piece of good luck, a remote event, a chance occurrence of monstrous proportions.” - Nassim Nicholas Taleb.
Posted by Unknown at 3:12 PM No comments: