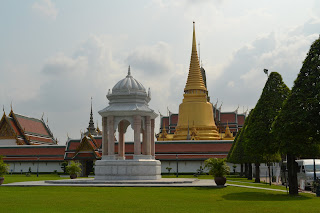 It was really crowded – tourists all over the place; a Chinese group was taking group snaps. I felt like being caught in one of the most famous shopping areas in South India (you know which one!). We found our way to the entrance ticket counter; among tourist spots we knew that this was among the highest in terms of entrance fee; 500 Baht for the Grand Palace and the Temple of the Emerald Buddha (Wat Phra Kaew – ‘Wat’ means Temple in Thai).

I was tempted by another counter nearby - there were giving audio tour handsets. My first experience with them was in the US and I’ve always found them useful. It would dent my pocked by another 200 Bahts (for 2 hours) but I joined the queue for it. At the counter there was an elderly Western couple keenly listening to the instructions of the staff about how to use the handset. The staff took a passport as security; ei

ther passport or credit card is kept as deposit so that they have something in case you run away with the headset! I handed over a debit card and later realized that it was my expired card that I gave them! All the while our expert was sitting silently with a look of tiredness; during his period of contemplation he felt certain that he left the sunglasses in the pharmacy. The audio lady told us that we go first through the Temple and then the Grand Palace.

The Ramayana is a very popular story in Thailand; their version is called the Ramakien (Wiki says it is their national epic). All kings of Thailand are called ‘Rama I’, ‘Rama II’ and so on - in honor of Rama, the central character in the Ramayana. Like Ayodhya, they have a city called Ayutthaya (name derived from Ayodhya). The audio guide said that the temple has 178 wall paintings depicting the story of Ramakien – Ramakien has been adapted to a Thai setting in terms of costumes and all. The paintings were beautiful but at that time I didn’t know which one was the starting - they were continuous one after the other and I didn’t have time to try and read the Thai inscriptions on each; I am not sure if I would have understood anything without a Thai English dictionary! 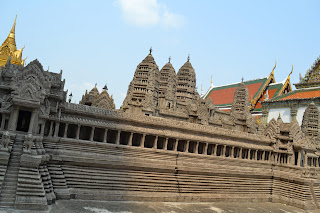 There were a few colorful pagoda style buildings that looked grand. A stone model of Angkor Wat (City of Temples) was beautiful in gray – the actual temple is in Cambodia; created initially for Lord Vishnu it was later used by Buddhists; it is the largest temple complex in the world (500 acres!). People with alien theories say that this was built by aliens due to the complexity, size, designs and accuracy in construction. (Pic on left is the Angkor Wat model)

I found it interesting to see the amount of things based on Indian mythology and Hinduism in these south Asian countries like Cambodia and Thailand.