The setup of the mall was like a mix of bazaar type shops as well as regular shopping mall buildings – it was lively. Our first requirement was dinner – there was one near the entrance. On the menu we saw a few items that seemed to be pure vegetarian and so our ‘expert’ gave his name and the waiter said it will take 20 minutes. We wandered around and saw a few more eateries. Our ‘expert’ friend rejected the regular fast food shops since we could have the same in India – he wanted exotic cuisines; we saw something of Vietnamese and he was fascinated by that. But by the looks of it, there didn’t seem to be even a single veg item available there. Even KFC didn’t have a veg burger!
We returned to the first eatery; the waiter pronounced our ‘expert’s’ name in a weird way and the 4 of us went in. We were curious by what we saw on the table. There was a medium sized steel vessel which was sitting on a heat pan – there were switches to increase/decrease the heat. Inside the vessel was what seemed like water. The waiter gave us menus and our ‘expert’ asked for a drink – you can guess what drink he ordered (read earlier editions!); the rest of us had some form of green tea (see pic). We ordered a bunch of items – fortunately the menu was in English and they also had pictures of the items. Our veggie friend ordered ‘green noodles’. The restaurant had a bright ambience and kind of lifted your spirits.
A few minutes later the dishes came one after the other along with wooden chopsticks! And each dish that we ordered came on a little plate and the size of the items were tiny – the fish was hardly the length of French fries! Talk about pictures that give you a wrong impression about size :-)
All the items looked raw except the green noodles which was true to its name – noodles that were green in color with nothing else; not one vegetable piece! With some actions, the waiter understood we were asking how to eat this – she said we should put the food in the pot and wait for five minutes. We followed her advice faithfully and waited while our veggie friend ate tentatively. “There’s no taste,” he said. Hopefully it was veg.! 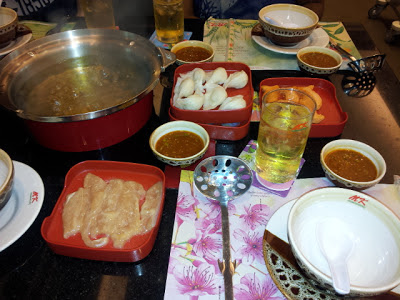 We tried to make conversation with another waiter – we asked him, “Name” and he showed his name badge which was written in Thai! We said, “No Thai.” He told us his name but we didn’t understand him and couldn’t talk to him. We were on our own; we dumped the items in the boiling water and pulled them out after a while and placed them in our cup and ate it (tried to with chopsticks). And it tasted tasteless! Then we put some sauce that was also served with the dish. We went a step further and put some sauce in the water. Slowly things started having some flavor – in the end we realized that it tastes good when you put all the ingredients in the boiling water, add some sauce, leave it for some time and then eat it. Even the water becomes like a soup and we pretty much emptied the whole thing.
“What a concept! They make us cook the food and ask us to pay for it!”
Memorable eating experience on day 1 but the best was yet to come!
Posted by Unknown at 9:21 AM