Plan for day 2 was to get to Pattaya; there are 3 options - train, bus and taxi. Train was something we wanted to try but it was the slowest and we had read on a few forums that this particular section wasn’t a scenic journey; for the bus we had to go from our hotel to the bus stand, then take the bus and then from bus stand to our hotel in Pattaya. Finally we decided on picking the taxi while having our breakfast. The noodles was good; as usual there was steamed white rice along with eggs, cornflakes and bread. 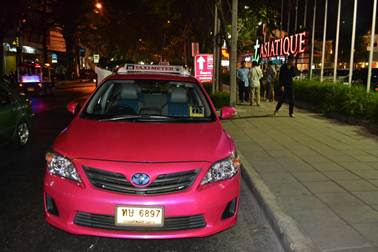 When we asked the receptionist (the same one who will deliver bad news with a smile) for a taxi, she replied in a shrill voice with a smile, "Now you won't get taxi. Late. Take 2 hours."
And then she drew her lips together in an ‘O’ shape, drew her eyebrows together and nodded as she delivered the news.
A two hour delay would mean that all our plans for Pattaya would take a hit because we would reach in the late afternoon - too late for what we planned to do.
"Can you give his number?" we asked her. This hotel had a tie-up with the driver who picked us from the airport and we thought that maybe we could talk to him and see.
"Nooooo," she smiled wide!
As we guys discussed our options, she made a call. And then she said, "He will come now." Again with a smile!

We packed up our bags and were ready when the pink taxi came at the doorstep; the elderly driver was happy to see us and kept patting us – it’s a pretty good fare that they get. The drive takes about a couple of hours from Bangkok to Pattaya; clean wide highway roads you will see and it is very likely that you will doze off after a while like a few in our cab did! Our expert tried desperately to avoid the sun but no matter which seat he sat on, the sun seemed to follow him! It was a fairly warm, bright, sunny day.

Tip: Confirm before you start on whether the toll fee is included in the total negotiated fare or not; we had a little argument at the end to make the driver remember that he promised us that toll will be paid by him.

As we entered the city there were some not-so-decent posters tucked away on a few walls and street corners. Some compare Pattaya to Las Vegas; we could now see why. Another odd thing was that there wasn’t much activity happening in the city – no hustle and bustle during the day; looked more relaxed like how it is in villages. Our expert was making a habit of losing things – he almost lost his mobile in the cab; when we found it we tried hard to prolong the prank and his anxiety!
Posted by Unknown at 9:11 PM