We were back in New Brunswick station in the morning; it looked a lot different during the day; a lot more comfortable! We headed back to New York and walked to Battery Park. If you want to see the Statue of Liberty then you surely have to make an online booking. There is no way you can go and get the ticket at the counter. The queue was huge and tickets for the day were sold out. It was the same on my prior trip as well; things had certainly not changed with regard to the Statue! After seeing the Statue from a distance we headed towards Wall Street.


On the way, we crossed the World Trade Center area. I still remember the sight of the twin towers and still remember the elevator ride we took on an earlier trip to the observatory. That was the first time that I had gone up a 100 floor skyscraper. And now there stood nothing in Ground Zero except for some construction work that was happening.

It was already afternoon and we were quite hungry. The first eatery we saw was Dunkin Donuts, to my friend’s delight. There was no second thought - we jumped into Dunkin. The employee there was a friendly Pakistani youngster. He was cheerful and energetic. We placed our order while we chit chatted. He talked about his South Indian roommate who was a very strict vegetarian and he thought all South Indians were strict veggies. As a bonus he gave us a couple of extra donuts.
“It seems there is something written on our face. He guessed we’re from South India immediately,” my friend said as we took a window side seat.
World's most famous street 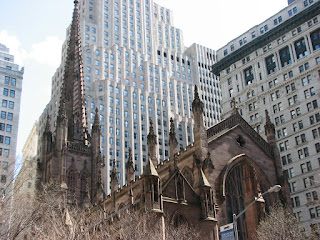 The financial district was pretty crowded even though today was a holiday; plenty of tourists. On the way, there was an old church that looked grand and an urban park with benches and a huge abstract structure in the middle (I say urban park because there was no greenery). I later learnt that the church is Trinity church built in the 19th century. And the park I guess is a tribute to Harry Hemsley - a billionaire who grew up in New York and created a real estate company that was one of the biggest property holders in the US. He is said to have made a lot of contributions to New York city. (The pic to the left is Trinity Church) 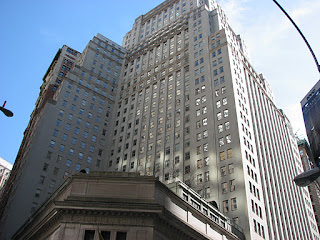 We crossed a couple of bank buildings before hitting the New York Stock Exchange. There was a barricade preventing people from going close to the entrance. Beside the NYSE was the J.P Morgan building (also called "The Corner" because it is in a corner!) J.P Morgan is credited with having reduced the impact of the “Panic of 1907” which could have ruined a number of US banks which were in need of funds and had lost credibility - it’s a situation that can arise even today if every one of us went to our banks and withdrew all our money... But it’s an event that is very rare and should ideally never happen. The Wall Street bombing that happened in 1920 caused damage to this building and even today you can see some of the scars of that blast on the building. (The pic above is not the best of picks to show the JP Morgan building but you can see how small it is when compared to the skyscrapers surrounding it; The Corner is the first building). 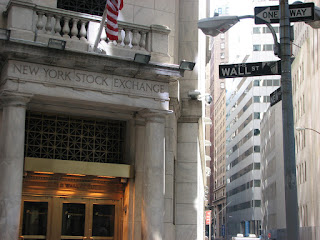 You kind of have goosebumps when you reflect on the amount of history associated with this street. The other place in US where I had this feeling was in Washington. After every couple of blocks or so you would find a few marble benches. We took a break in one such area where a youngster was practicing skate-boarding; we saw him skate, jump on to a bench and then continue skating as he jumped off the bench. (Pic to the right shows the NYSE which is at the beginning of Wall Street; I kind of like the way they display street signs on each corner).


We sipped water and were planning on what next. We had a lot of time on hand but since there was nothing else on my friend's list I suggested, “We can take the bus back to Boston.”
“You think we’ll have time to catch it?”
Checking the watch we made a dash. I grabbed the map and headed towards Chinatown. We went in and out of a metro station - the metro wouldn’t get us too close and we’d anyway have to walk as well. As we crossed each street, I cross checked the street name on the map. My general feeling in New York, and maybe it’s the same in other places in US as well, is that most people walk really fast - and it is quite a challenge to keep up with their pace. Not the tourist who are ambling at leisure but the people who are working there. But today we were faster than most of them.
I had become quite comfortable with the streets and raced away cutting diagonals to reach our destination quickly. When we came close to the bridge we knew we were almost there but according to the bus schedule, we should have missed the bus. We still pushed along and were delighted to see a bus near their office. On enquiring we found that this was the next bus and the guy said it was full and that we need to come at least 30 minutes before departure. The next bus was in another 40 minutes or so  (it seems like they ran extra trips on weekends because we never remember seeing these extra two trips on their website).
“You ran like you were possessed,” my friend commented as we entered the office to buy tickets.
This was an interesting New York trip because we spent most of our time walking and the best way to soak in the culture of a city is by walking!
Posted by Unknown at 8:48 PM