We were there upto almost closing time; we wound up after visiting the dinos section. We had a good walk across Central park. My friend bought a large Pretzel (it’s like a crispy salty biscuit in tubular shape) from a roadside vendor and he didn’t like it - many of the vendors seemed to be of Indian origin. 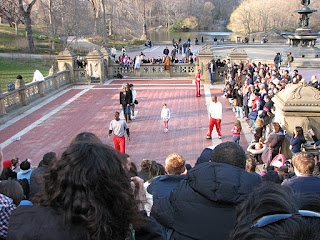 In the middle of the park, in an open space, there were 3 guys doing a public performance - a few small stunts along with some situational comedy. They were so well rehearsed that all 3 of them spoke the same words at exactly the same time; it sounded good to hear. At the end of the performance they came around collecting money and I’ll have to admit that they were pretty aggressive in money collection - fair enough because they did put up a good show (pic on right).
Times Square


The next stop on our list was Times Square (pic below). It was dark by the time we reached there and it was getting a little chilly. I still had my large leather jacket on but the problem was with my hands that were unprotected. Times Square at night is always filled with people and lights. We took snaps and had dinner at a Subways restaurant.
My friend ordered a foot long sandwich and I followed suit - a footlong is quite a heavy meal; as the name suggests it is a one foot long bun with veggies and sauce stuffed in. 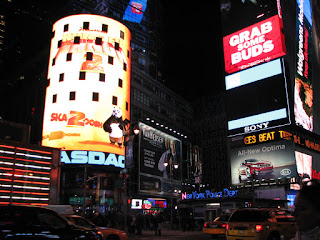 “We are running short of quarters.”
“Yeah. Let’s ask the guy at the counter.”

Quarters (25 cents coins) are needed to make phone calls from public telephone booths. Back home it would be very hard to get change from shopkeepers unless you bought something from them. We weren’t sure of the protocol here but having bought sandwiches and a couple of drinks we were confident of getting quarters. The guy at the counter happened to be an Indian and he said, “If you want you can use my phone,” and pulled out his mobile.
We told him that we’ll need to make a call after an hour in New Jersey. He gave us quarters for two dollars.
“When you ask for quarters, everyone knows what you want it for!”
Night at the platform!
It was past 8 and we were on our way to take the train to New Jersey. We passed by Broadway and I remembered the show “Phantom of the Opera” that I saw a few years back - quite memorable it was; I lost my friend’s mobile in that show! 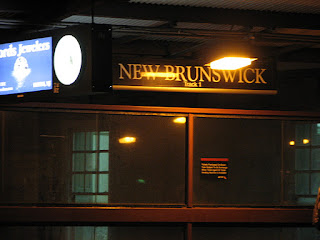 We took a PATH (Port Authority of New York and New Jersey) train to New Brunswick after checking with my friend's friend on phone for direction. It was a long ride and we kept a close watch on the series of stops. It was late night when we reached New Brunswick - we took the steps down from the platform. Most of the people who got down with us were picked up by someone or the other. We were the only ones left - we saw a public telephone booth. The call got connected on the first try itself but the line wasn’t clear. We tried a few more times with no luck; we lost a few precious quarters! We hoped that he’d come soon. The place was deserted and we headed back up to the platform bench. There was a single guy loitering around who came over and asked for quarters. He said he wanted to call his girlfriend or something of the sort - I said I didn’t have any quarters. Then he went to the next bench where my friend was and tried his luck there. Whether he was genuine or not, I don’t know. On the opposite side of the platform, a young lady waiting for the train was dressed in a skirt. I was feeling pretty chill and there she was in a skirt with no signs of feeling cold!

After waiting for a long time my friend suggested, “Maybe he’s come to the front - I don’t think he’ll know we are up in the platform.”
“Let’s go and see.” 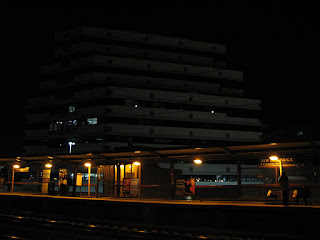 We went down the stairs and walked through a narrow tunnel to the front. This was facing what seemed like the main road. There were a couple of lights here and there was a door that appeared to lead into the station office. Maybe we could wait inside. But there was a lady trying to open it and found it locked - the office was closed; only the platform was open. We tried a public booth here but that wasn’t working as well. At 11 in the night in an unknown place, with very few people around it was a little scary. Fortunately my friend’s friend suddenly turned up at the main entrance.
Posted by Unknown at 7:47 PM