For the trip to New York, I left the planning to my friend. I left the choice of places to visit to him and he arranged for stay on Saturday night in one of his ex-colleague’s place in New Jersey.


We had cornflakes and bread before starting out early morning on Saturday. My friend was fairly convinced that we wouldn't catch the first bus. And he also tends to be worried in the car that I’m not keeping an eye on the right side of the car. He’d remind me often, “Hey, you are too close to the white line.” He didn’t feel comfortable with someone else driving; he believed that paranoid was the new normal in the world and so he was paranoid in trusting me with his life :-) But there was not much he could do; I was more than happy to give him a few jitters!
Chinese bus

We were in time at the Boston station to catch the 7:30am Chinese bus to New York. It cost only $15 for one person, one-way. It was kind of similar to our Government buses; for the cost it was pretty decent. They even had free wifi within the bus. The ride was a little over 3 hours and today happened to be the cricket world cup final - India Vs Sri Lanka and one of India’s best chances to win. I logged on to the net and followed the score online. You don’t have much legroom in these seats and I hopped over to the seat in front since both seats were empty; our bus was just half full. There was a halt in between at a junk food restaurant. Sri Lanka was doing decent batting first but without making a massive score I didn’t believe they had a chance. India’s strength was batting and on home soil almost every batsman could score big. 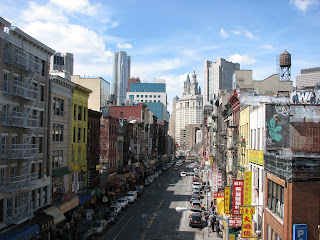 The Chinese bus, quite aptly, drops you off in Chinatown in New York. This part of the city appeared quite congested. Just beside our drop off point there was a baseball ground. Venturing out, we walked on the street towards the Manhattan bridge which is parallel to the famous Brooklyn bridge. New York is a city of 5 boroughs (a borough is a division with the city) and these bridges connect Manhattan and Brooklyn. Near the bridge there were Chinese roadside vegetable hawkers and there was a bicycle trail on the bridge. We walked on the pedestrian trail to the other side - my friend was impressed by the graffiti on the bridge; people had drawn graffitis in places where we couldn’t even imagine how they reached. There are subway tracks that go below the bridge. Walking to the other side I was nostalgic because it reminded me of short duration I spent here (you can read my old travelogue for it!)
It had been quite a while since we heard honking and on one traffic junction there were at least 3 cars honking. New York was better in honking but still nothing compared to back home!

After going up and down the bridge we took the metro to the American Museum of Natural History. The museum is on the border of Central Park, one of the largest parks in New York. We were hungry and roamed about in search of a restaurant; my friend wished for a Dunkin Donut but there was none. We finally ended up in a sandwich shop - in hunger I gobbled the sandwich while he felt nauseating - something about the mayonnaise he didn’t like. We drank some coke and entered the museum.  My friend has a fascination for natural history museums. But I didn’t like the part where they had dummy plants and animals and every museum of natural history has that. There was a huge crowd but we had a corporate offer for free tickets. There were plenty of artifacts from different civilizations all over the world - even Aladdin’s lamp! There was a rock from the Moon and explanation about earthquakes and a live monitor showing earthquakes that were about to happen across the world. 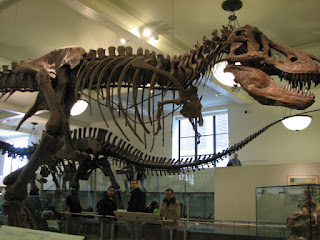 A special exhibition on Tibetan Medical paintings was being hosted in the museum. I found this quite interesting - about diagnosis and treatment done in the olden days. Fascinating was the concept of diagnosis using urine, pulse and the tongue. I have noticed that from the color of the tongue you can confirm if you have fever or just a cold - the tongue tends to have a white coating in the case of a fever; not sure if it applies to everyone but I have verified it in a few people.

For treatment, they focussed on dietary and lifestyle changes - without the aid of equipment, it was interesting to learn how they diagnosed problems based on observation.
Posted by Unknown at 9:10 PM