I had covered one half of the garden; my friend and I wandered to the right half of the garden via the Peirce-duPont House. The story goes that this arboretum (collection of trees) was about to be sold for lumber when Pierre du Pont bought the property in 1906. He kept adding to the collection of specimens and used this as his private estate - must’ve been grand living in a place like this. He established a foundation to manage the garden and today it is more than 1000 acres in size. 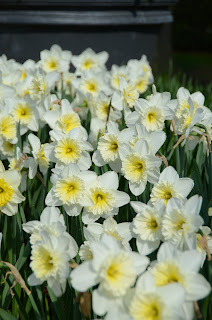 On the right half was the tulip garden - plenty more tulips out here and it was a photographer’s delight. My friend was tired with the walking. I finally found a drinking water fountain basin near the tulips - it was good that we didn’t throw the water bottle we bought in the restaurant. Water fountains are different in the US - you push the button below the basin and water will fire upwards from the tap. The other way would have been to have the tap in the conventional way, like we have in water filters back in India - the problem is you need to use a cup or your hands to drink from them; here you don’t need any of that - hold the button and catch the water spray in your mouth. This also wasn’t ideal - you can’t drink like you drink normally; you catch a few sips. But if you had a water bottle you could fill it up partially and drink. Anyway, it was a simple mechanism that didn’t require cups.
I went around to the other side which was an even longer walk - this side had more trees and less flowers; it was like a well maintained forest with plenty of tall trees. There was a bird house - a wooden hut at a height made completely of wood. Further down was another set of fountains and further north was a walk through the meadows. Plenty of grass and some water in between - the meadow route was huge; you could walk around the border; it was quiet because not many came this far. Beside the meadows was another tree house - this one slightly bigger. Next to the tree house was a forest trail - this was completely deserted; along the trail you had tree stumps where you could sit. There were points where the board would ask you to listen to nature’s sounds. I saw only one elderly couple on this forest trail. It was a bit spooky with the light going down and you hearing only some weird noises. Who knows what might pop up at any moment! 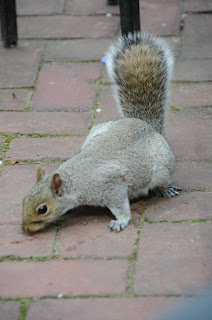 I took some unexplored route back to the tulip area. I was tired; it was 4pm and time to wind up. My friend was taking snaps of a squirrel.
“Anything of interest on the other side?”
“Plenty of trees - you should come back to this place after a few months.”
On our return we stopped at a burger king restaurant but it was locked. So we went to the supermarket next to it and bought some drinks and salted peanuts. I fiddled around with my friend's camera, learning how to use it - he had a pro type digital camera that was bulky and has many options with extra lens fittings.


Dinner was in Friendlys restaurant in Baltimore - a sumptuous meal for $10 with ice cream! It began raining heavily with thunder and lightning. Finally the 100% prediction of rain had come true!
Posted by Unknown at 4:35 PM