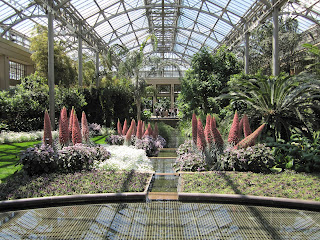 Off we headed towards Longwood Gardens (again in Philadelphia - about an hour’s drive from Amish village). There were a couple of mistakes we did - we didn’t carry snacks with us (comes in very handy when you are traveling) and we didn’t have lunch before entering the Garden. The parking lot was huge and by the size of that we knew we’d have to do plenty of walking inside.
Just outside the entrance there was a beautiful set of tulips and my friend started clicking again.
“People usually take snaps from above but it looks good when you take it from below.”
“Oh; the subject should be above our eye level then.”
We would have spent more than 5 minutes in that area. The trailer sure did look impressive!
There was a decent crowd; we picked our tickets and strolled inside. Going by the map we headed first to the Terrace restaurant. The Easter buffet was sold out - a little expensive buffet, held once a year; my friend was keen on trying it out but it was all sold out online itself. So the second mistake we did was not having lunch outside - pretty much always, the food in tourist spots are a lot expensive than outside. We could even have brought food from outside and had it here. 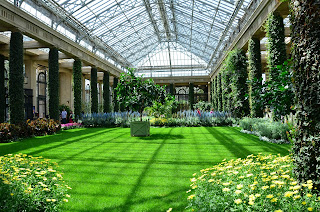 The concept of audio tours is very popular in the US - either it is a kit you can borrow (like in Eastern State Penitentiary) or some app that you need to download to your smartphone before visiting the place. From the restaurant we entered the New East Conservatory block and the place was very beautiful - a glass house with plenty of plants and flowers in a pleasing arrangement. You could simply sit there and admire them for hours.
It was  a rectangular hall with symmetry in the sense that what was on the left side was repeated on the right with a pool of water in the center. And on the right there was a lady playing on a harp - the slow music with intermittent high tempo tunes sounded good. Many kids stood looking at her in awe and so did we. Plants, trees, flowers, water and music was a great combo to soothe the mind. 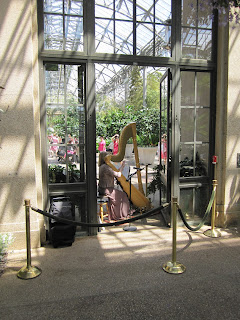 There were numerous flowers we had never ever seen or even heard of - some names I still remember are the bell flower, slipper orchid etc; flowers in different colors and different shapes and sizes - some even appearing like beetles and insects. There were the standard ones like daffodils and roses as well (different colors of roses - red, white and what not). There was a children’s area where children are encouraged to get themselves wet playing in the water that shoots across from fountains in different areas. We took quite a lot of time to finish the conservatory area itself and this was just one portion of the garden!
My friend was tired when we stepped out of the Conservatory building and the sun was beating down on us; not too strong but still pretty hot - and the weather forecast said rain! The water bottle we bought was almost over.
“I’ll sit here,” my friend said and took a seat on the balcony that was facing the open air theatre - a grand theatre down below.
“I’ll check out the area on this side behind the theatre and come.” 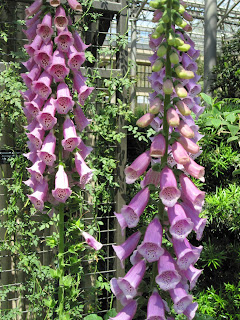 There were a couple of things on this side - the Idea garden and the eye of the water. The Idea Garden had a few patches of tulips - tulips in multiple colors - pink, white, yellow, red, orange. Further down on an uphill was something called the Chimes Tower. I was tired with walking but still continued - having come so far, might as well finish the round and return. At the base of the hill was a waterfall and beside it was an old tower. The Chimes Tower housed carillon - a set of bells at the top of the tower that are used to play music - these aren’t small bells but large bronze ones. It plays every half an hour and sounded grand. Climbing to the top you reach the “eye of the water” - that’s kind of like the starting point for the waterfall down below. The entire place was filled with greenery and flowers; even the walk up the hill.
Posted by Unknown at 8:34 PM