It’s been a month since the last post; kind of didn’t have the mood to write - not a writer’s block but more like writer’s laziness; you just feel like you don’t want to do anything at all - just want to eat and sleep as much as possible! Strange it is - sometimes you can just go on sleeping...
Heard about a guy who got some 13 lakhs in dowry and I was wondering, “Wow; just having a fixed deposit with that would fetch you a steady stream of monthly income - nice pocket money, like a salary!”
Anyway... back to the travelogue... 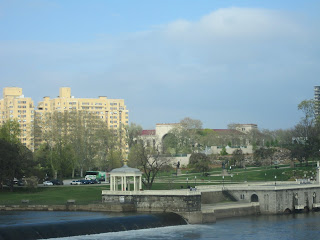 (pic on the left is just as we were exiting Philadelphia)
There was just a light drizzle along the way. A couple of hours drive with the aid of the GPS and we reached Days Inn in Lancaster. As we drove, we could feel the change in atmosphere - this was more like the country side - you had lots of farms, could see some horses and cows (they were well fed and clean - how often do we find that back home!). We had booked a room online; you could get cheaper rates if you book earlier and many places had offers incase you booked online. I picked plenty of pamphlets at the reception while my friend was collecting the room keys - it was actually a pair of electronic cards. The room was cosy; again there were no bright tube lights around - everywhere it was the orangish bulb lights. There were two double beds with nice bedside lamps. I was pretty hungry after having missed lunch as well.

Looking at the options for eateries, we went to a fast food outlet Friendly’s. Not knowing that it was just on the opposite side of the road we took the car and went around twice since on the first round we missed the parking spot. On entering, the first thing we noticed was a group of 6 young girls wearing a blue and white dress seated on a table. It looked like a school uniform but they didn’t seem like school girls - probably in college; college uniform? The burgers were pretty large and so were the french fries - you can feel the potato. And so I had my dinner with burger and fries and apple juice - I liked apple juice than soda. I ate slowly - taking my own sweet time; we finished with ice cream - I just took a double scoop with one of the flavors as blueberry. My friend ordered some other type of creamy dessert which was like a softie packed in a cup - the quantity was a lot more than the double scoop. It was 7pm when we returned back to the hotel - one hour for dinner!
100%? Not really!
The weather websites said tomorrow also would be rain but if the prediction was going to be like today then we would be pretty happy with it - 100% rain just means that it would rain at some point of time during the day; it didn’t mean that you would have rain for the whole day!
We finally dropped the Hershey’s plan - there is a Hershey’s theme park and tour in Lancaster (Hershey is a famous chocolate maker). I came across this when I was in school and ever since have wanted to visit the factory. It was there on our plan in case it rained heavily tomorrow. After some research my friend said, “It’s not the real factory that they take us on tour. It’s a made up one along with the theme park.”
I tried to watch a movie on some tv channel but felt too sleepy and my eyes automatically closed shut.

Cloudy day
Breakfast was simple - self serving style: cornflakes, bread, bagels (kind of like bread in a small oval shape but hard), muffins and cup cakes. They also had a waffle maker. Waffles were like pancakes (I loved pancakes with honey) - the difference being that you had indentations on it. Pour the batter in a small cup and then empty the contents onto a hot plate. Close the lid and wait till the machine cooks the waffle. That’s it - waffle ready. It was soft, fluffy and very tasty with honey.
We packed out by 8:30 am - double and triple checked the room before leaving. Weather looked fine - no rain. 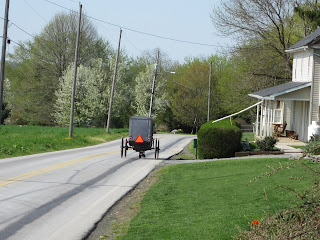 “Cloudy weather will be good to take snaps of the flowers,” my friend commented. He was more like a professional photographer.
On the pamphlets that I picked, we had a map that said there was an information center. It was beside a petrol bunk. On closer inspection we found that there was no one around. We filled petrol and returned - it was 9am but still no one was around. They probably opened only at 10am.
My friend had researched about road trips in this area and one of them was a road trip going across covered bridges. He had seen this movie about a photographer who travelled around the country to take snaps of covered bridges - and in the process of that he meets the heroine or something of the sort. Taking snaps is fine, but I didn’t know if the heroine part would happen in our trip :-)
Posted by Unknown at 8:54 PM