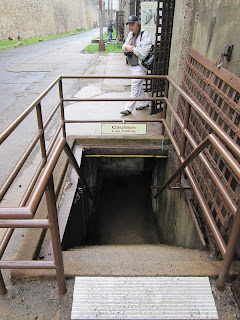 The tour once again led us back to the outside. And it was drizzling again. There was a guide who was about to start a little session about the greenhouse in the prison; I hopped over to join the group. She opened the greenhouse and told us how a privileged few got to work here. The prison system changed over time - it moved away from solitary confinement and prisoners worked as well. Working in this greenhouse was a privilege since it didn’t involve much physical labour.
In the later part of the prison history, solitary confinement was only used as a punishment - there were four small cells called Klondike (The Hole) which were created underground. You could barely stand down below because the ceiling was quite low and this was an even worser place to be in - no light and shut underground; total isolation (pic on the left shows The Hole).
Another cell block was used to house inmates on death row - electronic locks were used only here and even guards would be separated from the prisoners since they were considered highly dangerous.
Famous moments
When you have prisons, you have famous prisoners and also escape stories. Interestingly, there were about 100 prisoners who had escaped during the prison’s lifetime but all were recaptured except one.

You might have heard about Willie Sutton and he was a prisoner here. He is one of the most famous bank robbers - robbed around 100 banks in 30 years and he spent a lot of time in prison as well (as much as half his adult life!). He was good in disguises and in breaking out of prisons. He used to rob with a gun and just before his death he said that he never carried a loaded gun during a robbery - well, another case of playing on the mind! The quote “Why do you rob banks? Because that’s where the money is,” is attributed to him. One of their escape attempts is what we see often in movies - they dug a tunnel from their cell to the outside - they even put lights in the tunnel! But all the men who escaped were caught - Willie was recaptured within a few minutes two blocks away from the prison! 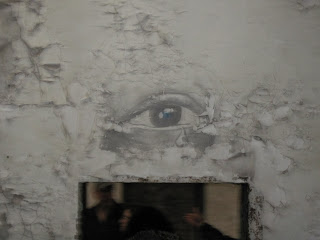 Al Capone was another famous prisoner - he had a lot of luxury items in his cell; it’s probably like the VIP treatment given in prisons these days for the rich and famous. His release was eventful - with hundreds showing up to catch a glimpse of the gangster during his release, the prison warden released him earlier to prevent problems.


(The picture on the right was drawn by an inmate above his door - any guesses why there? Perhaps to symbolize that they are always being watched by the guards and probably in that location because that is the one place which the guards cannot see!)
Another famous prisoner was a dog named Pep - yeah a dog was a prisoner! The crime? Pep murdered the governor’s wife’s cat - so Pep was the cat murdering dog! There is another story that floats around which says the governor actually donated his dog to the prison to give the inmates some company.
There were stories of ghosts and there was also a synagogue within the prison. It was around 4:30pm when we stepped outside the prison. For my friend, I think this prison trip pretty much made his day - this isn’t the type of museum you usually get to see.
We took the car and headed to the Museum of Art to try and catch a glimpse of the Rocky statue (the statue that you see in the movie Rocky) but couldn’t because there was no area on the street to park the car. We decided to call it a day and headed to Days Inn.
Posted by Unknown at 8:33 PM