Self guided prison tour
I liked this audio system - it felt as if someone was just taking you along and in case you missed something you could always rewind and listen again. The history of this prison was quite interesting - there was a challenge thrown to design an ideal prison that led to this structure. There was the group that believed that a criminal can be reformed if he spends time alone pondering over life. So the prison was designed with this in mind but there is no proof as to whether the system was successful. In those days it was hard to figure if there were repeat prisoners because identification was just by visible marks and not by fingerprints. So someone who walked out might well have returned a week later under a different name and no one would have known.
The barbed wires were meant as a means of intimidation; so were the watch post like towers on the edges of the prison. The entire prison resembled a huge guarded fortress and just the look of it would make people feel that escape isn’t an option! Play on the mind!
A model prison! 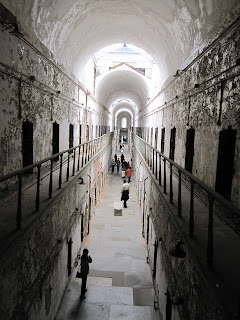 The arrangement was such that you had lengthy corridors like spokes of a wheel. So the warden standing in the center, which was a circular room, can actually see till the end of each corridor without having to step into them. Each cell was a small room with a wooden door - not the grilled type that we see in movies these days; these doors prevented a prisoner from seeing anyone else! In fact they mentioned about a prisoner who stayed here 2 years for a minor offense - he spent 23 hours a day in his cell and the one hour when he stepped outside was with a hood on his face. The idea was solitary confinement - that’s what would make a person look at their inner self. Each cell had a bible. Food was given through an opening at the bottom of the door. Newly admitted inmates were hooded when they arrived so that they didn’t know the layout of the prison.
This prison was in fact a model prison which inspired many others around the world - it was called the Pennsylvania system (Philadelphia is in Pennsylvania state); encouraging confinement and having the radial supervising system. The other system was the New York System where prisoners were asked to work together.
Charles Dickens visits US 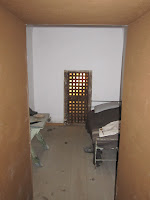 Interesting concept - let a guy stay in solitary confinement to look at his inner self; the more he looked inside the greater the chance of reforming! He doesn’t have anything to do so he will reflect on the past and on his crime and regret it (hopefully). Easy to go mad as well I guess. In life sometimes when even one person avoids us we tend to feel isolated; just imagine spending everyday in a little room all alone. In fact Charles Dickens said that this was one of the two places to visit in your lifetime - the other was Niagara (those were the 2 places in his must-see list when he came to the US). He believed it was cruel and wrong to impose solitary confinement and tamper with the mysteries of the brain. He said it was immeasurably worse than any torture of the body. 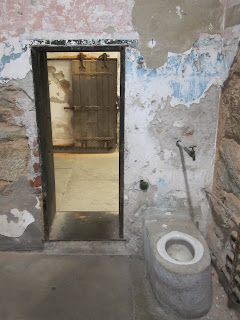 With the arrangement here, the number of prisoners who could be accommodated was less - only one prisoner per cell and the number of cells in a spoke were limited. So it was obviously expensive to maintain and to increase the number of inmates that could be accommodated a new spoke developed had a two floor structure. As I stood inside one of the rooms; it was eerie to think how it would be with the door shut. Absolutely nothing inside - just a toilet with hardly any space. No TV, no paper and no one to talk to.
Posted by Unknown at 8:56 PM