Part 12 - From colors to black and white!

The rest of the museum was more fun for children - there were plenty of slides and tubes filled with information for little kids. If it weren’t for the Da Vinci exhibition I don’t think this museum would have been that interesting for us. There was a planetarium show which we watched - that was pretty good and lengthy but being short of sleep I dozed off at a point where the narrator (recorded voice of Liam Neeson, the villain in Batman Begins and hero of Taken) was just repeating the same facts again and again. The show was about black holes and some of the scenes were quite impressive where you felt as if you really were sucked into a hole - but I felt the seats should have been positioned in such a way that you just look into the sky instead of looking straight ahead. This was the longest planetarium show I had watched - more than 20 minutes!

The pendulum
The museum had a huge Focault’s pendulum (in the middle with the staircase running around it) with plenty of pegs kept in a circular fashion on the surface at the bottom; as the pendulum moved, one peg would get tipped over. Focault’s pendulum was one of the first practical experiments to prove that the earth is rotating. The pendulum is setup such that it moves back and forth - it won’t twist and each swing would knock over a different peg - this wouldn’t be the case if the earth were stationary.
A nice website if you are interested in learning about the pendulum: http://www.calacademy.org/products/pendulum/
iPhone comes handy
We didn’t spend too long in the museum. Next up was the Eastern State Penitentiary. My friend pulled up our location on his iPhone in Google Maps - I was impressed; you could see in real time your location on the map; and as you walked, the blue balloon indicating the phone also moved. Kind of neat - and I guess it signals the end of paper maps. The area we headed towards seemed deserted even though it was a Saturday afternoon. Not much crowds and certainly didn’t feel like walking in the heart of Boston or New York city where there would always be a hustle and bustle. Maybe this area of Philadelphia wasn’t the main part of the city; right after the Metropolitan Museum of Art it got deserted - plenty of apartment buildings and residential areas. The best part was that you had a good amount of trees on the lanes between buildings and there were beautiful flowers blossoming.
“Hungry?”, my friend asked.
“It’s okay; if we see something on the way we’ll jump in.”
“I had a little snack when you were in the Da Vinci hall.”
“Oh; you came out pretty early then.”


Seeing the flowers my friend couldn't resist taking snaps - these are his and now you know the reason for the title of this post! 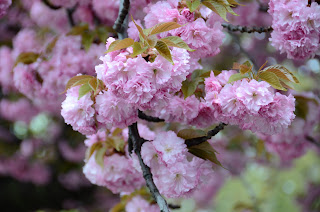 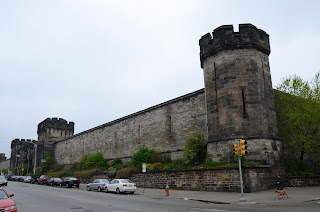 The prison
There was not one restaurant in sight and so we continued on. It didn’t take long to guess which building was the prison - the one with the huge wall! It certainly appeared to be a huge facility. A prison is called a Penitentiary (a correction facility). The entrance was unassuming - we paid for 2 tickets and the lady asked, “Would you like to have the guided tour?” Since it was free we opted for it. “It will start in about 20 minutes.”
We went up the stairs and then saw a few people walking around with audio sets - you had a choice; either go for the tour guided trip or you go for a self guided trip where you are given a headset. My friend said, “I think self guided is better - we can do it at our pace.”
We went back to the reception and got the audio set. It’s a nice little player with headphones and a little lcd display that shows the track number that is currently playing. There was a board when we came up the stairs that said “Press 1 for the audio tour.”
The prison walls were really high - and there appeared to be barbed wires on top; perhaps electrocuted as well.
Posted by Unknown at 7:53 PM