On popular demand we shall cut short the length of the editions and post hopefully twice a week instead of once.

Wii through the night 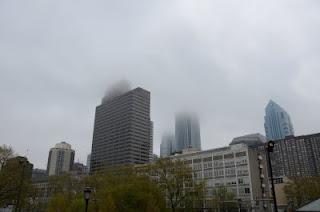 At night, by coincidence while looking at some of the boxes in my friend’s place I learnt that he had Wii.

Another friend had bought it and was yet to take it back.

I had always been fascinated by Nintendo’s Wii - a gaming console that you played by making actions rather than pressing buttons on a pad. After searching the boxes for a while we found the console and a couple of game CDs. I hooked it on to the large Sony TV he had in his room.

“There’s no charge in the hand

sets - you’ll have to charge it for a while.”

It was past 11 and I was not going to give up without playing for at least 5 mins.! I searched for the

charger and hooked it in.

My friend started picking things and was thinking over what to take for the weekend trip. After 5 minutes he said, “That should be enough - we can try one handset.”

And it worked - my friend went to bed and left me alone with the console. I started with tennis and after playing some 20 games I won my first point. The console picked up our movement fairly well but I wasn’t able to figure out how to hit the ball hard - so rallies lasted long and in the end the computer would win the point.

I realized the problem with Wii - you get exhausted after a while; but on Sony’s Playstation, which is like a traditional gaming console, you could play for hours at stretch and not get tired. I switched to the boxing game - this one you had to use two handsets and move your hands in boxing fashion. I found this a lot easier than tennis and I even won many matches. Each match I won made me push on for another game and yet another game and so on till it was 12:30! Finally by 1am I hit bed after brushing my teeth.

I hardly had 6 hours of sleep and after having cornflakes for breakfast, off we were to Philadelphia. It was drizzling - not a good sign and weather forecasts predicted a gloomy day as well. 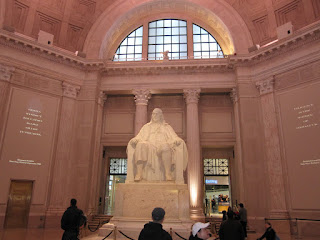 "I hope it doesn’t get very heavy; then it is tough to drive.”

The problem on highways is that water spews from the wheels of the car in front onto your windscreen since everyone is going at high speeds.

Guided by the GPS we reached the Franklin Institute in Philadelphia - the problem was parking; we went around the Institute a couple of times and couldn’t find the parking! Finally we dropped the car in a garage type parking in a neighboring block. There was no rain but it was misty.

The very first sight was this huge statue of Benjamin Franklin sitting in an empty room that had quotations appearing on four panels around the room.

“Diligence is the mother of good luck.”

“Genius without education is like silver in the mine.”

“Early to bed and early to rise makes man healthy, wealthy and wise.”

The Franklin Institute was abuzz with activity - plenty of people and kids in the reception area.

A glimpse of the genius 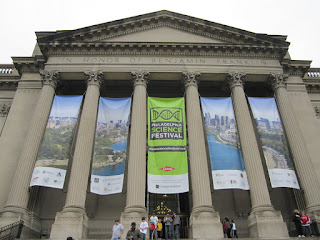 The main reason I had this place on our list was because of a special Leonardo Da Vinci exhibition. So that’s where we headed to first. There was a video running in the entrance to the exhibition where I stood to listen to the whole narration - it was interesting. Da Vinci never attended formal education; in fact he learnt to write the wrong way! He wrote from right to left - kind of like laterally inverted writing. And his masterpiece Mona Lisa was not done in a short span of time; not even within a year - it seems he worked on it for over twelve years, carrying it around with him as he travelled and making alterations to it to make it perfect - every masterpiece certainly has a lot of effort that has gone into it! He was not in favor of wars but created designs for a number of war equipment. It is mind boggling to consider what all he was - inventor, painter, anatomist, botanist, mathematician, scientist... the list goes on; a self educated genius.