Unfortunately no photography was allowed inside the exhibition. But there was this weird couple that despite the warnings tried to take a few snaps. The security noticed on one instant and warned them politely. Some of Leonardo’s real notes were put up on exhibition - and there was one guy who tried to use his mobile as a mirror to see the writing laterally inverted; remember he wrote from right to left. Seeing him a few others also tried the same. Some might say Leonardo wrote in reverse to make his writing secretive but perhaps it was because he was left handed. Writing this way might just have been something very natural to him and he was never corrected because he didn’t have much formal education. 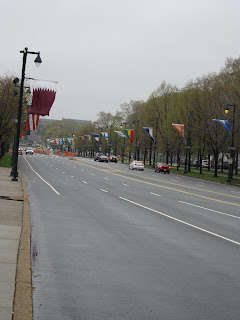 (this snap is the road leading to the Museum of Art - those of you who have seen Rocky will know this road; it's the one Sylvester Stallone runs on)
In the main hall they had these real models made based on the designs of Leonardo - they were full size models in fact and you could map the model to what he had sketched. There were posters explaining the working of the model and in some places there were touch screen LCDs as well; real huge LCDs. There is a collection of Leonardo’s scientific writings known as Codex Hammer which it has many of his sketches and observations. The Codex was renamed each time someone bought it.
Leonardo didn’t like war but back in those days with the amount of wars waged, the rulers of kingdoms wanted war machines. To me the most touching part was reading one of the lines that he had written, “Tell me, have I done anything of worth? Tell me if anything was ever done.”
Yeah, maybe he wrote it when he was in difficult times but it is amazing; a guy of that calibre wondering if he did anything of worth - and looking at the present day and the things we do, I wonder what he’d think if he were living a life like us.
Robots, paintings and a bridge
There were diagrams and explanation about his ideal city - a city that was never built. There was a life size model of his mechanical lion - a lion that would walk a few steps and then open its chest to reveal lilies. The beauty is that he was able to make such automated machines those days itself - 500 years back and all of it using gears and pulleys. Leonardo even created devices for stage plays to create dramatic effects.
In those days painters made their own paints and Leonardo experimented with the paints and surface on which he painted - this has led to some of his paintings flaking off and having to be reconstructed for preservation. From his notes you could see that he sketched a lot of what he observed - so even for the Last Supper painting, something that might seem trivial like the hand of Judas in the painting was actually sketched earlier in one of his books. He probably referred to these sketches when he did the actual painting. The exhibition didn’t have the real paintings but it had digital recreations of the them along with explanations - for instance in the Last Supper, you could pick each character and read the explanation of what art critics felt it was meant to symbolize.
Not all of his designs were built or used. He had a lot of designs on flying - but they said that many of them wouldn’t stay in the air for more than a few seconds. But then you have to think that the work he did was still fascinating because he did all this before there was electricity or motors. 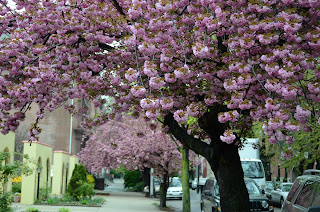 My friend had finished a round of the exhibition before I had even completed 25% of it! He said he’ll wait outside near the reception area. I was lost fascinated looking at his notes which were available digitally - you could flip the writing and then get a translation as well. He had scribbled a lot of equations related to geometry beside his design sketches. Near the exit of the exhibition was a “do it yourself” area where you could create his self supporting bridge - a bridge that didn’t need anything extra to keep it up - that was also fascinating.
I felt this exhibition alone was worth the trip to Philadelphia.
Learn more about the genius here: http://www.universalleonardo.org/
Posted by Unknown at 3:09 PM