Well, we now have 3 threads running because I'm on travel right now... so here we go...

Since it was the morning 9am flight I didn’t have the problem of feeling sleepy; it helps to do online check-in from home – you can bypass a queue and you can also come an hour later. The Chennai system had changed; you no longer had a security screening for check-in baggage. “It is done in line,” the airport staff replied. There was a huge group of girls, of varying ages, in pink dress having the name of some Sri Lankan dancing academy.

I had about two hours to kill; could have started later from home but I stuck to the conventional timing of  being in airport 3 hours prior to travel. After the security check, I waited in the departures area. The toilets, unfortunately, were still not maintained well enough. There were a lot of flights in the morning. While seated I overheard a conversation between a couple of middle aged employed women – I could figure out one worked in a bank but till the end couldn’t guess where the other was employed. I tried to follow the conversation that was interesting - Kuala Lumpur had made its name as being an unsafe city; apparently there were a lot of chain snatching cases where even a guy was robbed of his gold chain. I was also observing the eyes and nose of people around – for people who are beginners in cartooning one of the hardest things, at least for me, is drawing distinct noses and eyes. With so many people of many cultures around, it seemed to observe the differences. And having a note in hand, I tried sketching as well. For some reason, though there was Tata wireless internet in the airport, I wasn’t able to browse any pages even though I could connect.

During the flight I happened to be seated near a New Zealand settled Indian editor of a fortnightly newspaper. He was on vacation with his family in Chennai for 2 weeks and heading for a week to Dubai. The Asian vegetarian meal was surprisingly pretty good – they had potatoes, a couple of pooris and okra (ladies finger) stuffed with potato in gravy. The family near me had a Jain meal – quite a lot of choices available. The entertainment system was good in terms of audio – but I still didn’t like the thought of keeping the volume so loud blasting into my ears and opted for “closed caption” movies – it’s basically subtitles available as an option for those who want it. Wiki says it is called ‘closed’ because it doesn’t appear to everyone by default (unlike the subtitles we see in tv).

I watched the movie “Contagion” about the outbreak of a new disease that first appeared on contact with pigs. The movie was another reminder of how unexpected life can be – wife looked healthy and fine for a minute and the next minute she experiences fits and dies. A famous celeb lineup which probably wasn’t really required with Matt Damon leading the way. We started 10 minutes late but the flight arrived on time; an interesting camera option in the entertainment system was the front flight cam and downwards cam – looked good during takeoff. Before entering the flight I picked up an Arabic newspaper along with the English newspaper to refresh my memory of Arabic letters and I realized that I had forgotten many of the letters! 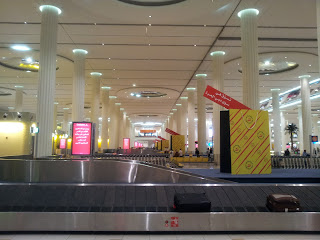 After exiting the flight, as I neared the immigration area I was directed to the eye-scan counter. This was something that had changed from last time; last time when I arrived I went up to the immigration officer before being sent for eye-scan. I headed to the restroom and was surprised to see two Indian-style toilets! The queue at the eye-scan counter had become bigger during my toilet-break as more flights were arriving in the morning. Standing in queue I realized the advantage of a smartphone; in such moments of boredom it can keep you busy. The airport also had free wifi which I used to send a message to my bro-in-law saying that it would get late. 90 minutes I stood in that queue – it was only then that the airport staff tried to divide the groups and open up more counters. Even the line for “ladies only” was overflowing.

After the eye-scan, immigration was a snap – took hardly 5 minutes and baggage collection was another 5 minutes. I paused a moment to absorb the grandeur of the airport before heading out.
Posted by Unknown at 8:53 AM