When we stepped out at 9am in the morning, the Pajero said the temperature was 14 degrees centrigrade; deserts are cooler than normal in winter but I don’t remember it being so cold 10 years back; global warming?

The business of SIP Abacus (Sociable Intelligible Progressive - an odd expansion) program for kids was certainly flourishing well in the Gulf. Hundreds turned up for the annual competition for different grades to determine who are the best students in math calculation (even though you had to pay extra for writing the test). They taught kids on solving math problems in the mind. Education certainly is very good business!

In the parking lot, at least 40% of the vehicles were the large ones – the large jeep type vehicles. It is a quite common sight in the US and even in India you tend to see more SUVs these days; the only problem is parking and maneuvering them in our side-lanes. Certain kids take competition too personal; after the results were announced, I saw a girl in tears because she didn’t win any certificate or medal. SIP actually gave plenty of medals; you had the champion trophy, then a runner up position, then a bunch of students for achievement awards and another bunch of students for something else – all these positions for each level of SIP. Her mom was consoling her saying you can practice for next time; “practice for a month and you will surely win.”


It seems last year there were more medals distributed - almost every kid who took the test was given a medal; that dilutes the value of winning. The daughter and mother reentered the school building with the mom wiping off the tears which poured intermittently. 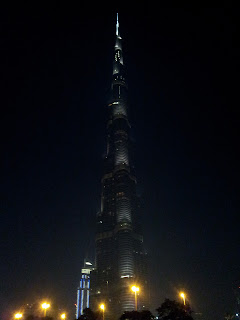 We headed to Palm Jumeirah (the man made structure in the shape of a palm tree - this is called an archipelago). There have been complaints that this structure is sinking slowly but the developers have refuted the claim; whatever the case, the structure was still well above sea level. On reaching the end there was the beach – not really a beach; there was a fence and then you had plenty of large stones just before the sea. There were a few benches before the concrete fence and they were unoccupied as we headed towards the end of the beach. The sun was beating hard but you didn't feel the heat because of the cool breeze; temperature was in the low 20s. We ate our lunch and then jumped across the fence after seeing another guy who was sitting alone on a large stone; it seemed like he had just finished his lunch and was contemplating seriously on something. Nice place for reflections. I jumped from the fence, underestimating the height and strained my ankle with the drop. We spent a few minutes before heading back home.


A nice place for a picnic - beach with stone slabs instead of sand.

All of nature’s wonders bring about a feeling of awe and so do man-made wonders; the sight of the height of Burj Khalifa (the tallest building in the world) was fascinating even now. In the future this would probably be commonplace but for now it was only the Burj standing way above all other skyscrapers in the Dubai skyline. Shooting for the movie Mission Impossible from this tower would have been exciting – hanging from the 133th floor; wow.

We wind up the last edition for this year... am heading over to catch the crowd at Burj Khalifa for the new year... time to contemplate on the year; and makes you (or at least me) wonder, 'what did I do this year?'
Posted by Unknown at 8:43 PM