This vacation trip was quite sudden – hardly any preparation or planning; on a Saturday evening it was decided that I’ll travel and I hadn’t booked the ticket or applied for the visa yet with my travel date being Wednesday. Struggled with booking a ticket online in Emirates because of a software bug and had to make a phone reservation for the ticket – online booking costs less than phone booking. On Monday bought the ticket, applied for a visa in the express category and Tuesday late evening got the visa as well. Emirates seems to have some tie-up with the visa authority because other travel agents and airlines said that it would at least take a week for visa processing since this was the peak season; I got mine in 18 hours.


Heading to the Burj Khalifa 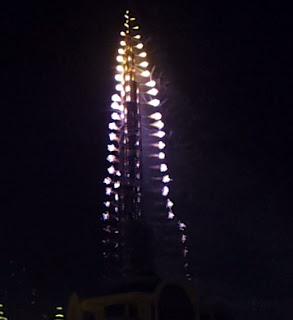 We returned from the trip to Hatta and Fujairah on 31st afternoon. The fireworks in the world’s tallest building (situated near the Dubai mall), I heard, were grand last time and so we didn’t want to miss it this time. The Government had obviously learnt from last time’s mela – they diverted all traffic in Dubai mall, extended the working hours for the metro, displayed advertisements to encourage the public to use the metros on New Year’s eve and had plenty of traffic cops deployed. We dropped the idea of going into the mall because with two kids going in that crowd and returning back would be quite a challenge. We started at 10pm from home planning to watch the fireworks from the vehicle. The roads leading to the mall were packed and as we neared the Burj Khalifa, a lot of cars searched for places to park or places to double-park while seated inside the vehicle. The public transport buses were packed even though every minute (literally every minute) there was at least one bus heading to the mall. After 11pm, the crowd of pedestrians increased rapidly - the young, the old, Asians, westerners, variety of fashion clothes, traditional clothes and just about everything. 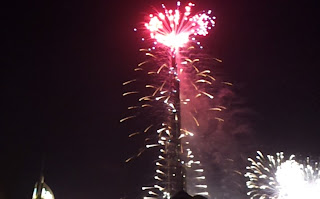 When our Pajero clock read 12:00, there was nothing. Even after a couple of minutes there was nothing. My bro-in-law said that they’d off the lights at 12:00. At this point, there were 3 buses waiting in traffic and the drivers opened the door in the main road itself. People stepped out of their vehicles leaving the cars on the main road, anxiously awaiting lights to go out. And then it did. All lights on the world’s tallest building went off for a few seconds.

The fireworks were awesome; I never remember having seen fireworks being shot from different floors on a building. It was synchronized well and you had fireworks going from the bottom of the building to the top and then from the top to the bottom. There were a couple of fireworks from the left and right side of the tower as well. There were plenty of colours – red, yellow, orange, white, purple, green. It lasted just 7 minutes. And after it was over, all the vehicles honked to signal the new year. For a while it appeared like a large palm tree in lights. 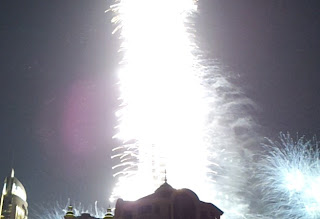 After that traffic was at a standstill for 35 minutes while pedestrians walked out of the Dubai mall. 35 minutes non stop there were waves of people; reminded me of Ranganathan street! People came in different attire – temperature was 23 degrees but pretty chill and yet there were few women in mini shorts and some in low back (or no-back) dresses. One RTA employee walked briskly past us as if it were early morning; he must’ve had one hectic day managing public transportation and it wasn’t yet over.

My bro-in-law said, “This firework display will help with developing business.”
It probably would – can help boost tourism with images of fireworks from the tallest building being published; and from the mall perspective, getting space in the mall must be very expensive. This mall is crowded on pretty much every day because of the added attraction of the Burj Khalifa and the fountains.

It took 1.5 hours for us to get back home; there were some nice Tamil songs playing on FM. And on our way back we saw that the other road (heading to Dubai mall) was packed with traffic for a few kilometers! People who had started late were stuck far far away!