There were some nice things I noticed during my short stay.

It's like New York
The metros were still spic and span – no dirt or garbage and tiles shining. The government was certainly spending enough to keep up the maintenance for so long. I saw a couple of South East Asians scrubbing the staircase in the metro. It’s ultimately the ground level workers who decide the outcome! 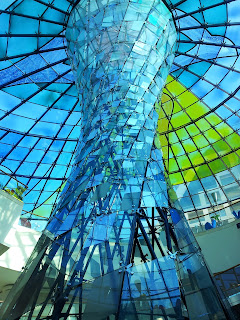 Last year I thought that perhaps people in Dubai might not use the metro much; but I was wrong. A lot of office goers used it for commuting. In the mornings and late in the evenings, the metros are packed with crowds; reminded me of New York crowds. There were only two lines - the red line and the newly opened green line. You had a train every 5 minutes. There were also a few of the metro staff who walked around like inspectors in the train. Once one man was told, “Chewing gum is not allowed Sir.” He was lucky to get away with just an advice. Eating and drinking was prohibited even in the stations - it helped them maintain cleanliness.


(pic to the left is an interesting structure in Wafi mall)
The RTA (Road & Transport Authority was responsible for the buses and metros) had a good call center. You could call them any time regarding reaching a destination and they would give you the bus numbers and approximate time it would take. The same information was also available online. Another useful system was that each bus stop had a board which displayed bus timings for the buses that came to that stop. Of course it isn’t exact but it gives a fair idea of how long you would need to wait.
Speaking of crowds, the crowd psychology applies even out here. Once when the train came, people were pushing others to get into the train. It was orderly; it seemed like everyone was just thinking, “I have to get in; who cares about others.” They kept one compartment reserved for children and women but even those got crowded during peak hours. And the crowd psychology applies at all levels across ages.

Fines
My sister told me a story about a man who was caught by traffic police for crossing the road instead of using the walkway bridge. He was taken directly to the police station. He had the guts to cross the road exactly at the place where they had put a huge warning sign for pedestrians saying “Use the footbridge”.
In Abu Dhabi, the police started levying spot fines on people littering the streets. It had helped the city become cleaner. 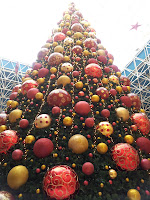 There were just a few malls that I had missed in my previous visit. Wafi city, with Wafi Mall, was one of them. The ‘city’ is a complex with a hotel, mall, spas and even some residence. The mall is themed on Egypt. There were these pharos and sphinxes. Inside there was a huge Christmas tree - it was beautiful. And as usual there was a Santa sitting in a little house; to have a snap with him you had to pay. All kids were naturally pulling their parents to the queue - around 15 families were in queue. Kids can certainly help businesses by making their parents spend.

I noticed it in McDonalds as well - Alvin and the Chipmunks part 3 movie was running and kids love the chipmunks. We went to watch it because of my niece - she has seen the second part on dvd probably hundred times at home. Part 3 was okay; not as good as the first one but kids were happy. McDonalds offered a kids meal in which you’d get a chipmunk toy - there were 8 toys to collect and invariably all kids asked for the kids meal mainly because of the toy. 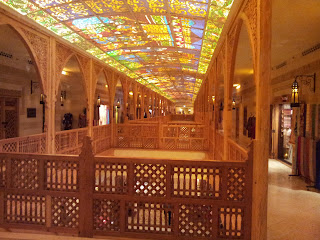 There is a souk (market place - pic to the left) that is kind of hidden within Wafi mall. But it is a beautiful place worth checking out. There are different divisions like Turkish, Egyptian etc. with plenty of shops. Being hidden, there was hardly anyone except for us and the shopkeepers. In another section of Wafi, there was Asha Bhosle's restaurant called “Asha's". We stepped in to just take a look at the menu - there was one menu just for drinks. Ambience was good but food prices were very costly.
Posted by Unknown at 9:23 PM