Part 28 - Standing atop the Washington Monument

The man was in his late 70s; he was healthy and used to take a walk early in the morning when he would buy the newspaper from a roadside stall and come home. Just like any other day he went out a couple of days back. But didn't return. A biker hit him on the crossing, he fell on the divider in the road and an iron rod struck his head. After spending a day or two in coma, he passed away - just like that... hale and healthy and suddenly gone...

Rewinding back to the US travelogue (just 2 editions to go)...

It was yet another weekend and I had planned to visit a college friend on the weekend in Virginia. Nearing the end of the trip I was a little worried that I might run out of money. So instead of taking the train or flight I opted for the cheapest form of travel - a bus to Washington DC from Boston. I had booked it online. I reached Boston early just to be on the safe side and also because there were only limited buses to Boston. I spent the time reading a medical thriller. The Megabus bus was at around 11pm but it was more than 30 minutes late. Finally when it came I found there were a lot of people using the service. I took a seat in the front beside a middle aged lady. The bus ride was super smooth. I did miss the pleasure of watching a movie - it was something I always looked forward to in bus rides. The seats were just about comfortable - the legroom wasn't great but then for the price being paid it was manageable; no complaints. 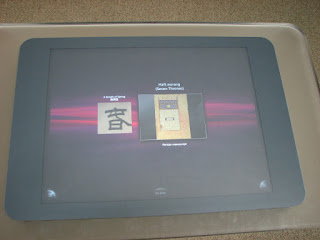 During the long journey the bus stopped once where the drivers changed. Even though we started more than 30 minutes late we reached DC on time. We stepped out on a huge parking lot that was taken up by Megabus. I walked towards the Union station to take the metro. The first thing I did was to get a ticket to go up the Washington monument. They had a ticket for 11 and I took it. In the meanwhile I strolled around the museum area. Most of my time was spent in the Arthur M Sackler Art Gallery. Boston had sparked an interest in art and I was specific in searching for art museums.

An interesting exhibit was about the "Mountain of Echoing Halls". Many Buddhist sculptures from the cave temples of Xiangtangshan were present. There were also large screen Mac systems which explained about them. At the time I visited, the art gallery had more staff than visitors! The exhibit setting itself was like that of a cave - calm and serene. They explained about the Maitreya - the Maitreya is the future Buddha who will arrive when mankind has fallen to low depths.

There was one section where they had Hindu Gods - the various avatars of Vishnu, Ganesha etc. There was an interesting note about why in temples one might find figures of dancers and musicians. I quote from what was written, "Hindus believe that everyone should aspire to four goals for life on earth: dharma, righteous living; artha, wealth acquired through pursuit of a profession; kama, human love; and moksha, spiritual salvation. Sculptors adorning Hindu temples address not only spiritual salvation but the three other goals as well."

The museum had a MS Surface table (pic on top left) that provided a great user experience to learning - it had a Persian poem and a Chinese painting with Calligraphy explained. I really didn't have too long to spend here because it was time to rush back to the Washington monument; I didn't want to miss that - I had been to Washington 3 times in the past and never got a ticket. 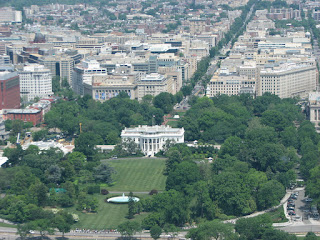 They took us to the top of the obelisk on an elevator. And along the way the tour guide explained a few things about the monument. The monument is a memorial for the first US president - George Washington. It is the world's tallest stone structure, standing 555 feet tall (169 metres). The top of the monument is made of Aluminum, which in those days was a rare metal - they had to use something as a lightning rod but which wouldn't tarnish. There are viewpoints on top which you can see through a window. The pic to the right shows the White House as seen from the top of the monument.


A couple of months after my trip there was a minor earthquake due to which the monument has been closed to the public till the damage is repaired!
Posted by Unknown at 7:34 PM