I’m back after a break - coming out of what you could call blues or whatever; 2 months since the last edition - yikes... Some heck of a slump.

Can you really be altruist?


You know it’s funny - my friend and I were discussing the other day whether it was everyone else who was crazy or whether it was we both who were crazy. The question is whether you can do something for someone without expecting anything in return. And if you’ve noticed, no matter how altruist you try to be, the world will look to find some alternate interpretation of it. On second thoughts, you probably weren’t strictly altruist in your intention because you might have done it with the thought of bringing joy or smile to someone - you still expect something in return - expect to make them happy; but that ain’t bad, right? Or maybe it is... And people around will spin stories by adding spice to it to say that you are doing it expecting to get some favor. But isn't it possible that we did it because we feel happy when we see someone happy?
Looking around, both of us concluded that it is just the two of us who are crazy!

It was nice when a editor called asking to publish one edition of the travelogue. And lately a few people have been asking me about the Travelogue and about the “Wake Up” series. You might have often heard in interviews people respond to a question by saying, “Even if one person were to benefit with this initiative then I will feel satisfied.” So, “Even if one person were to feel good reading the travelogue or Wake Up series, then I will feel happy.” Well, I’m not sure - maybe a million readers would make me happy; that’s not too much to ask, is it? We have a world population of 7 billion... So 1 million of that means just 0.014%! 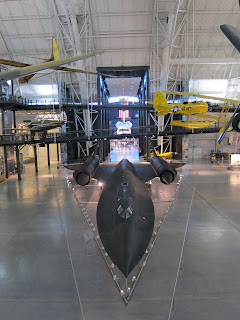 Alright alright... Enough with all that; let’s get back to our travelogue... I took a long metro ride from the heart of Washington DC to the outskirts to meet a college friend - as the train went past stations, the areas became more and more deserted. If this were the night I would have been a little worried - remember the New Jersey incident; not having a mobile phone is a big problem!


Strangely both of us still looked the same as we did in college; hardly any change - the last we saw each other was in Coimbatore and after so many years we meet in Virginia. It was late in the afternoon and since both of us hadn't had lunch, he drove to an Indian restaurant. Most Indian restaurants, especially on weekends, have a buffet. And since it had been a while since I ate a full Indian meal, I thoroughly enjoyed the lunch. We then went to a Smithsonian National Air and Space museum. There were plenty of real planes inside the museum. The pick of the lot was the sleek black Lockheed SR-71 (also called Blackbird - see pic on left) - it holds the speed record of some 3000 kms/hour! An interesting logo on the tail is that of a skunk (see pic below) - apparently, “Skunk Works” is part of the Lockheed company involved in aircraft design. Interesting history about the term “skunkwork projects” - http://en.wikipedia.org/wiki/Skunkworks_project 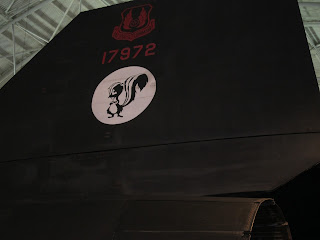 There is plenty to see in this museum, just like all the other Smithsonian museums in Washington DC. This was the same museum used in Transformers - remember the one where they go in search of a Decepticon and find one hidden in an aircraft hangar? This was the museum. Unfortunately, the museum was nearing closing time - you can easily spend a few hours here.


I had the option of taking rest but declined the offer. Tempted on seeing the tennis rackets in my friend’s home, we headed to the tennis court. It had been a long time since I struck a tennis ball but it is a sport I liked. In the places I’ve been to in the US, I always find the tennis courts available for use - they are free for the public and well maintained. We warmed up and played a couple of sets which I lost by a game in both. Though we wanted to continue playing, we stopped - the danger when you suddenly play is that you over-exert yourself and damage your body. And I had already done enough damage by playing two sets! Since it is a best of five sets match, the next time i meet him we have to finish our incomplete business.

After a shower and dinner outside, we planned for our Sunday. I had to leave by evening so that I could be in time to catch the night bus to Boston from Washington. That meant we had roughly 6am till 3pm to use and that meant we could visit any one place. We picked the cave for our Sunday trip before heading to bed.
Posted by Unknown at 11:49 PM