Alright, I can’t resist the temptation to continue the banter from last edition about altruistic deeds. It amazes to think how some people can love unconditionally - and they are not even related by blood.

We generally tend to lose our cool when someone doesn’t respond favorably to us; and at the other extreme of human nature you have someone like Mother Teresa who has probably faced umpteen situations where people never even treated her with respect (one very often quoted incident is the one about the baker who spit at her); really amazing how she kept going.
Talking of altruism and smiles, reminds me of another thing. If there is someone who has a different type of laughter - maybe it’s loud, or maybe shrill, or maybe with some odd accent, then people around them will ask them to control it. Even though the laughter would just last for a few seconds, society tries to curtail it. I wonder why we have to do so - what’s wrong with the person laughing their heart out for a few seconds? Maybe for a few seconds it sounds odd but there's no harm done. And I think the uninhibited laughter is a lot more beautiful than the muffed one. Would you ask a baby to control its laughter?
Visiting a cavern 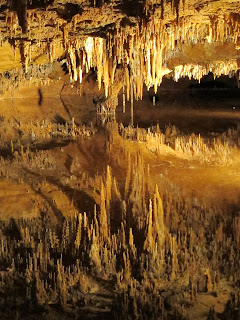 Seems like travelogues are becoming like the “WakeUp” series... back to travelogue... So off we were to Luray Caverns that was discovered some 130 years ago. A large underground cave is called a cavern. Walking down the steps I didn’t feel there was anything special. I had brought a sweater since I thought the temperature might be low - but it isn’t that bad. Here also they use the self guided audio tour system - they provide a little audio player where you can press numbers to jump to different sections of the tour. There were a lot of stalagmites and stalactites around us (I was reminded of geography). The audio explained about the color differences - depending on the mineral composition the colors varied. As we walked in the cave, there were more beautiful sights to be seen. A few formations had been given special names because of what they resembled. (pic on left is the reflection in Dream Lake)
Marriage underground!

One special spot was the dream lake - there is actually were little water but the reflection of the stalactite is beautiful (stalactites hang from the ceiling in case you've forgotten your geography!). There was one area where you had flowstone that covers walls - this gives the appearance of a veil and it is called “Titania’s veil”. In another area there were huge columns running from the ceiling to the floor - about 40 feet in height or so. In some places you can even see water dripping from the ceiling and it gives the appearance of a fountain when it drips on calcite (which is white). 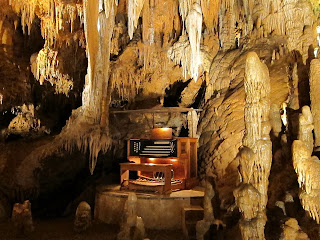 There is even a cathedral where it seems there used to be weddings - a wedding in a cave! And in the cathedral they have built a musical instrument - the stalacpipe organ. This device is setup such that sounds are produced by tapping into the formations in the cave. It took them years of research and design to build! So when you are in the cathedral you can actually hear music - and listening to music in that vast hall sounds great. It is even possible to do a live performance on the instrument but most of the time the sequence of keys are automated. You would think that all there is to see in a cavern is two types of formations - one growing upwards and the other growing downwards. But the combination of minerals and water has produced a variety of things. (Pic above is the musical instrument)
Pure air 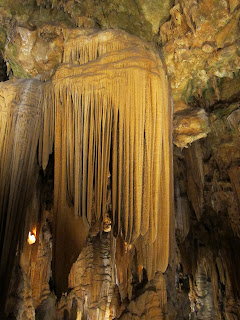 As we neared the exit, I realized the nose block I had while entering the cave had cleared. And one of the last parts of the audio tours spoke about the cleanliness of air inside the cave. In fact in the 1900s they had a sanitarium above the cave which used the air from the cave to circulate inside the house. This is said to be one of the first air conditioned homes - and the clean air was said to help in the recovery from respiratory illnesses.
(Pic on right is Saracen's Tent - they will appear like curtains)

To top off the trip, there was a car museum beside the caverns where we spent a few minutes before leaving. There were some old Peugeot, Bugati and Mercedes cars.

And with that another weekend ended in the USA; I headed back to Union Station in Washington DC. The bus was at night and I had to do a ten minute walk to an open ground where there were a fleet of MegaBus buses; though the bus was late they reached Boston on time.
Posted by Unknown at 8:32 PM