I didn’t catch much sleep because they didn’t switch off all the lights - usually on overnight flights they do. We had a very smooth landing - hardly felt a bump as the wheels hit the tarmac. Even before the flight came to a complete halt, people were out of their seats and queued up to exit the flight. It was the same while boarding the flight as well; I always wonder what’s the hurry? Even if you got into the flight first, the flight isn’t going to leave immediately and you are anyway going to have your seat. I guess sometimes for the most trivial of things we try to act as if we are ahead of the competition - first in the plane, first out of the plane, first to take luggage and what not. 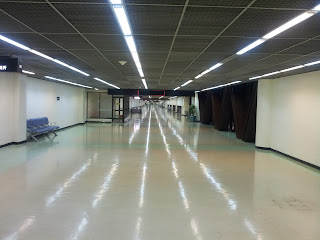 When we stepped off the flight the same air host wished us with a smile, “Swadee Khrab.” The airline literally packed the bus so that they didn’t have to do another trip between the flight and the airport – it felt just like Chennai! But once inside the airport we could see the difference; the floor was shiny and there was an old lady cleaning the floor with a machine (it was 3:30am local time). We four took our own sweet time after entering the airport; we took snaps, had a good laugh, used the restroom and finally walked to the immigration counter.

Thailand has the concept of visa on arrival for Indian citizens; but we had taken our visa in India itself; there was a good crowd queued up for doing the visa on arrival formalities. We bypassed that queue and headed straight to immigration where there was no one except the officers. They looked at our passport, gave us a second glance, took a snap of us using a bionic eye camera, stapled a card on our passport, scribbled something on the visa and let us through - let 3 of us through.

Truth be told, there is no way a person would easily accept that the person in the photo was him; if you look at it for 5 minutes you will find a resemblance. The lady called a couple of her colleagues and the three of them together stared at him. He tried explaining the reason and they listened to him in the way that children listen to an interesting bedtime story. The officers were content with his narration.  Though we three were away from the counter, it seemed like our expert and the officers were exchanging jokes, smiling and laughing heartily. Since there were no other passengers, I guess my friend provided them with some relief in their boring routine night. And our expert was also happy - whether it was the hangover effect or something else I don't know!

Around 3:50am we went down the escalator to the arrivals area; the airport seemed dead - very few people moving around. We had asked our hotel to send for a cab pickup at 5am; 1 hour to kill in a deserted airport - and everyone was short of sleep.