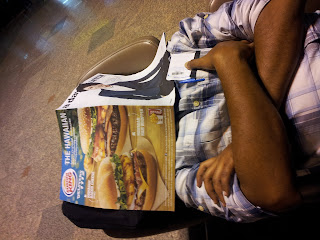 On the ground floor, there was only one cab driver holding a name plate but it was for someone else. On the rightmost end of the floor there were a few people catching up on sleep by lying down on the comfortable chairs. One of us was also doing the same! Since it wouldn’t be possible to kill time in a deserted airport we thought of calling the hotel to ask them to send the cab earlier. And just nearby we saw a row of five public coin-box phones. Those of you who’ve read my US travelogue will know how much I detest these phones. I hoped Thailand was better.

But first problem was that we needed Thai Baht coins while we had only notes. There was one coffee shop open in the sleeping area (it’s actually the waiting area that was converted to sleeping area). We asked the guy for change but he refused. If we had bought something I’m sure he would have given change but the rates displayed on the board were extravagant - it’s natural tendency to convert everything to your local currency. A coffee cost 60 Baht - wow; that’s Rs.120; no way we are buying that!

When we went upstairs hoping to find some exchange counter, we were in for a surprise. The entire floor was buzzing with activity and filled with passengers - this was the departure area. We got coins for 10 Baht in the third counter; was funny – we’d show the note and keep repeating ‘change?’. Reviews had warned us that English is not something that local Thai people will understand. So while I tried to figure out how to make a call, I left the talking to our friend with the sprain.

We faithfully followed the instructions on the coinbox but it didn’t work; the picture said drop the coin, dial a code and then the number. Fortunately the 5 Baht coin was returned by the machine. One passenger who was loitering nearby offered help - he dropped our coin in the slot and immediately shook his head from left to right; the machine wasn’t working. Then he tried it on the next one and as soon as he dropped the coin, the LCD displayed “Credit: 5.00”. Here we go. I read the number and my friend dialed. No luck - there was no ring tone. He pushed the lever down for disconnecting but nothing happened - our coin was stuck; he pushed it down a few times and finally we heard a clinking sound. The coin reappeared!

We tried again and were lucky third time in getting connected. My friend spoke in proper English explaining our situation. He would say a few lines and then repeat them. Just when it seemed like he was able to convey the message, he would go back to repeating the first line! The only thing he figured from the lady at the other end was that the phone number connected to the hotel and not the cab company. The LCD display showed “Credit: 3.00” when he got fed up with repeating his words and cut the call. We thought it would refund 3 Baht back and kept pushing the lever but no luck; the machine wouldn’t return change - it had swallowed our money!

Our expert was the most agitated in the group – he was short of sleep and the beer wasn’t a permanent cure for his throat problem; or perhaps the beer added to his agitation! Our next attempt was to flag down a yellow cab that stopped to drop a passenger. We ran to the driver’s side and he rolled down the window. We started with a full sentence but he didn’t get it. We ended up by just repeating the street name “Petchburi Soi.” I tried telling him by putting some Thai accent. He smiled, gave a blank look and nodded sideways. We showed him the address and it was then that I realized that if he couldn’t understand English how could he read English? He smiled and moved on.