Travelogue: Day 1 At the hotel (Bangkok)

Seeing our hapless state in trying to get a cab, the security guard standing near the exit tried telling us something. “Theeeere.” He pointed towards the other gate. “Here no… Theeeere." He repeated it three times. We walked (my friend limped!) past a row of gates to the other end. On the way a couple of uniformed taxi guys saw us. Being from Chennai we are always skeptical about these taxi guys who roam around near the airport or train station; but here it was a little different. They were affiliated to the main guy running taxis out of the airport and recognized our address. The supervisor was standing behind a desk outside the gate. It was still dark and since there were very few people around it felt a little scary  - in a foreign land, pitch dark outside, hardly anyone who spoke English and surrounded by some locals!
“You have taxi?”
“Yes.”
“Should we come here for taking the taxi?” He looked at us puzzled. We broke it down to a simpler form, “Come... here... taxi?”
“Yes.”
“We bring bag. Come.”
“Yes.”


But in the meantime, the clock went past 5am and our hotel cabbie had arrived with the name plate. He had a bigger smile than the other cab driver and he put his hand on me in a fatherly fashion while talking. I know that in some cultures touching strangers is prohibited but that didn’t seem the case here. We were a little skeptical about talking too much though he seemed the type of person who would easily keep on talking. His English was the best that we had seen so far in Thailand barring the immigration officers. We stepped into a Pink Toyota car. For most of the ride we stayed quiet and observant. The roads had sparse traffic, were smooth and clean; it was around 5:45am when we reached our place - and I'm certain that if we had taken our own taxi we would never have found this place; it was located in some side alley within a side alley.
The day begins
A couple of roadside mobile food stalls were getting ready for the day; they were almost exactly the same like the roadside eateries you see in Chennai on 4 wheels. One difference was that they had a small piece of cardboard with the menu – and lo behold it had English! But much to the dismay of our sprained ankle friend, there was no vegetarian item – minimum was the presence of an egg! The hotel was more like a guest house; not a star hotel. As soon as we stepped off the taxi, an elderly lady welcomed us. She was the one who talked on phone! I could hardly understand what she was saying when she smiled and talked; she spoke as if we were her grandchildren.
"Room. I ask,… tell…. You go good walk…. This way." She gave us a small map of the place.
"Go come. Breakfast." 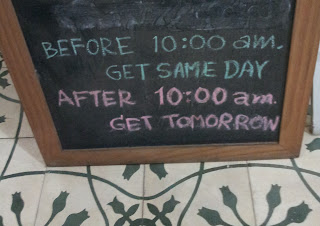 The cabbie came to get his money and he as usual patted our back while talking. "You can call anytime. Within city I put meter. Outside city fixed rate." And he gave us his visiting card.
We left our bag behind the reception desk and took a walk around to familiarize ourselves with the place. The width of these side streets was as bad as Chennai. Only one vehicle could travel in them at a time. We were pretty much in an entirely local area of Bangkok. Given our nature of talking and walking, we never noticed a car that was coming behind us. But the driver didn’t honk; he waited patiently for us to move.
(Pic: In the guesthouse – I took this pic after the word on top was rubbed; we remember seeing that word as: ‘Breakfast’!)
We entered a small Seven-Eleven (7-11) shop; this is a chain of stores that are open 24 hours (like a little grocery shop with basic items). I had read reviews that we could buy a SIM card here. And again we hit a problem – communication!
“SIM?”
“Yes.” And the lady started saying some names. “..True… Happy…” We had read about the telecom providers online and so when I heard those two names I realized what she was getting at. “Charge? Rate?”
“50 Baht.”
“India call?”
“Yes.”
“How much?”
“1 Baht. India.”
“1 Baht per minute?”


She didn’t understand; she pulled a True SIM card pack and opened it. There was a leaflet inside; thankfully the table was in English – calling rates for different countries. Our sprained ankle friend bought the SIM and the lady at the counter set it up; no big deal – you just dial a few numbers, go into some automated caller options and you’re ready. Buying a SIM card is pretty simple; no worries about ID cards or any form to be filled out.
Posted by Unknown at 9:10 AM