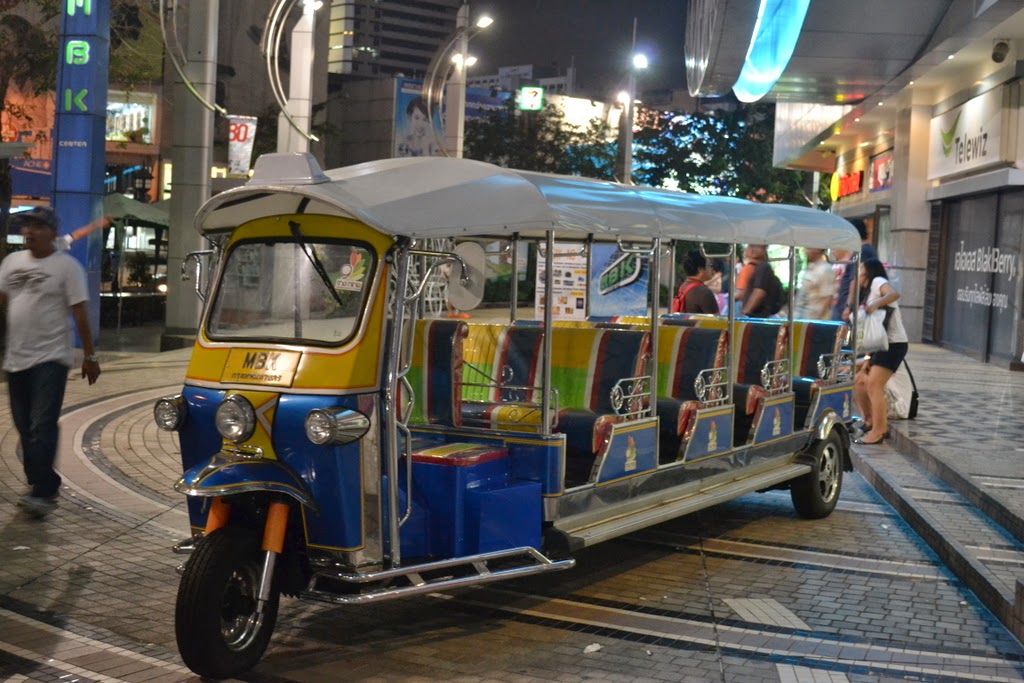 It was late in the evening when we reached Bangkok city; from the GPS I knew that we were fairly close to our hotel. It was near a BTS (Bangkok Transit System) skytrain station. But since we had baggage we didn't want to try the train. There were some tuk-tuks that passed by (they are like auto rickshaws) - you have to negotiate with them. The problem was that we were four people with baggage; it was a struggle saying "Petchburi soi" to the drivers but one tuk-tuk guy understood us. GPS comes in handy but you need to have a SIM card in your phone for it to work; mobile phones use the GPS via cellular towers. Fortunately our expert had a Thai SIM in his phone. The driver was surprised when the four of us crammed ourselves into his tuk-tuk - we paid more than the normal fare but we were overloading his tuk-tuk!

The Bangkok City Hotel was the best of the lot during our trip since this was a full fledged hotel and not a B&B (bread and breakfast) - search online and you get offers sometimes on decent hotels that make the price range comparable to B&B inns. Please read reviews since they help you pick good places - the three places we stayed in were all nice ones. This hotel was located near some shopping malls - one of the reasons we picked this. We had a shower, took a nap and then strolled in the city. Malls close early on weekdays so you’ll have to plan accordingly. We just got to spend a short time in the MBK mall during which time one of our group members got lost inside a closed shop! There were a few nice t-shirts souvenirs available for cheap prices but the shops had closed. Pantip mall (this is an exclusive electronics mall) was also closing down; you can find iPads with Android on them! There are many cheap tablets and phones - they even give a 1-year warranty which is good if you are staying in Thailand because for that price it is ok to change phones every year.

For dinner we wanted to have something authentic; between MBK and our hotel we had seen a few restaurants - these are neither full road-side restaurants nor the normal type; they are a hybrid version - there is not much room inside and most people eat on tables on the footpath. We picked the restaurant that had the largest crowd assuming that it was the most popular one. There were just 2 or 3 tables free - we took the one that was very close to the edge of the footpath. 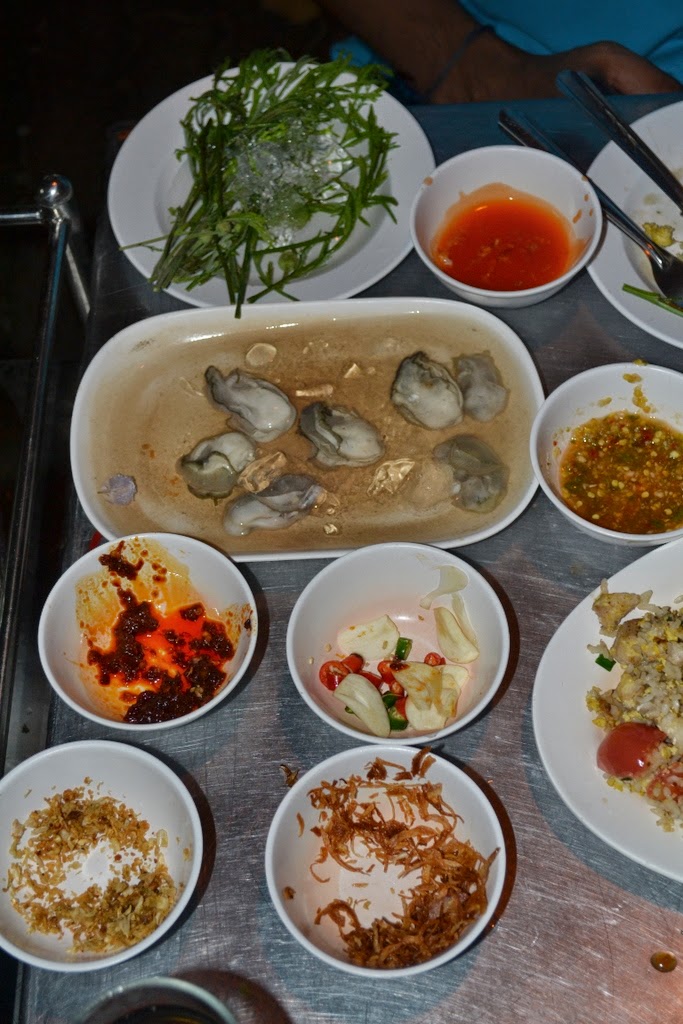 Beer is quite common in Thailand; one person in our group had beer while another had strawberry milk - which is also quite common in Thailand! We were given the menu and we had one heck of a time trying to place our order. The waitress, a middle aged lady, was very polite and tried hard to understand what we were saying. But it was obvious that this hotel wasn’t a place where foreigners stopped - everyone dining were locals. The pictures on the menu were a big help for us - we pointed out each item; we tried to tell her to substitute beef for chicken in one dish; I tried to say it the Thai way - Gor gai - but you got to get the accent right; our expert tried mimicking a chicken voice! The waitress tried bringing someone else to help but even they didn’t know English. “No beef. Only chicken. Only ghor ghai,” we kept repeating in different accents. In the end we pointed out some other dish on the menu that seemed like chicken. We also ordered for oyster — recommended by our photographer. Our veggie friend stayed out of this whole thing - he just had a glass of coke since there was no way to confirm if any of the dishes were pure vegetarian. In Pattaya, the hotel owner told us that even the sauces supplied with dishes would have some meat!

The special dish that came to our table was the oyster - it was served in a plate along with 6 cups and green stems. Each cup had some side dish like grated onions, sauce etc. We had no idea how to eat it and tried to ask our waitress. She took an oyster, placed it on a plate, added one spoon from each cup on top of the oyster and presented us with the plate. When you eat that it tastes like bhel puri! The oyster on its own doesn’t have any taste - it is served raw; the toppings are what give the flavour - oyster bhel puri! I must say we did enjoy our light meal. People kept coming to this restaurant even after 10 in the night.