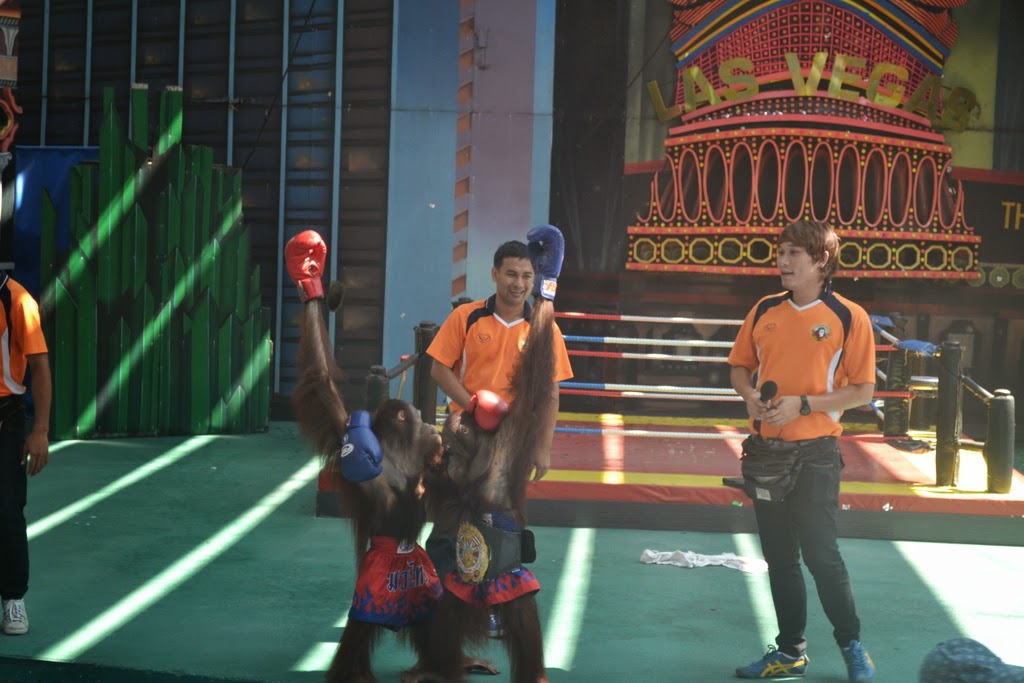 In the morning, from our hotel we had arranged for a trip to Safari World which is within Bangkok. Again it is better to go through an operator since you will get a better deal than buying tickets directly. And almost every hotel can help you with making the arrangement. Breakfast was sumptuous and it had some typical Thai cuisine items - like the Tom Yum soup with a coconut flavour and Pad Thai (stir fried noodles).

Safari World is pretty much like a zoo with a few animal shows. There was a lot of crowd when we reached in the morning at around 9am - lot of school kids as well as Asian tourist groups. Our driver purchased the tickets for us and also stuck a sticker on all our shirts - seems like every tour operator uses a sticker of their own with a number to help identify which group you belong to. 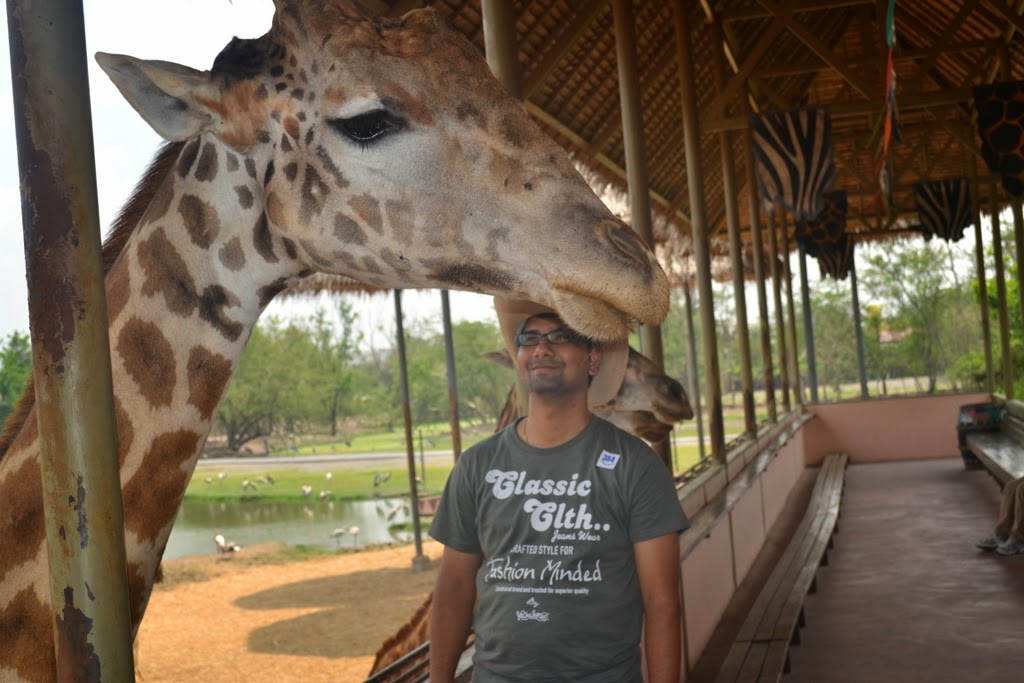 There was one thing that stuck to my mind and I guess it will influence me whenever I see animals in future. The first show was an Orangutan (they are animals like chimpanzees) boxing show. The chimps looked pretty old and were clothed in shorts and t-shirt and women's dress as well. And they had to perform a set of routines that were obviously not part of their nature. I wondered how we would feel if we were made to perform such things with an audience watching us and laughing at us? Looking at the chimps I felt sorry for them and I felt bad that I was in my own way contributing to this. There have been news stories about chimps being smuggled for use in this zoo. 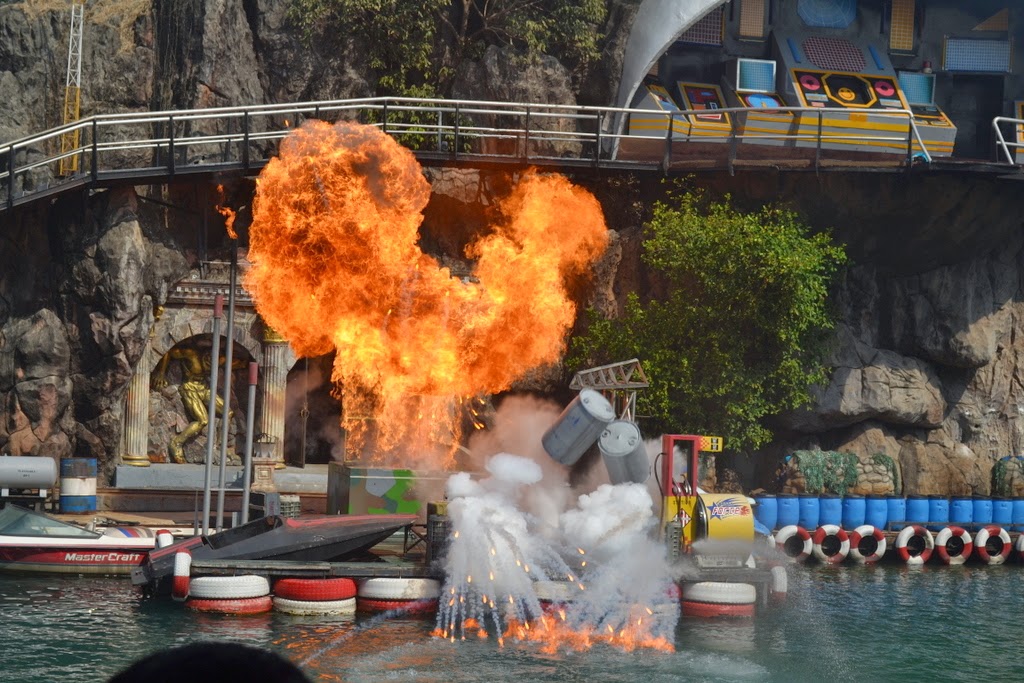 The giraffe area was different in the sense that the giraffes were free to roam within a large enclosure and visitors were permitted to feed them. There was a standard seal and dolphin show. And there were animals and birds in cages. There was a bird show and there was a explosive stunt show (pic on left). And as usual, in shows involving water, the first few rows would definitely get wet. To beat the heat, I thought it would be good to sit in the front. The zoo was charging money in case you wanted to feed baby tigers - we saw a small girl feeding a tiger with a baby bottle! In the evening at about 4pm, the driver took us on a mini-safari; you can drive your own vehicle through this open area which has entrance like a smaller version of the Jurassic park gate - it opens and closes automatically. Once inside there are wild animals roaming freely; not entirely freely since there are some nets and fences but the area available for the animals is large - must be better than being enclosed in a cage; you can see rhinos, tigers, lions, deers, pigs, peacocks etc.

Buzzing street by the malls

For the night while our expert and veggie friend went to check out TV shops (TVs are a lot cheaper here than in India but be careful from where you get them), our photographer friend and me took a stroll towards the malls. On the pavement were many small handmade craft shops - not really shops but people who put their stuff for sale on display. There were plenty of items and I guess it was a way to make some pocket money - create some stuff and sell it on the weekend in the evening over here. The whole street was buzzing with activity and in a way it reminded me of Times Square.

Our photographer observed an interesting trend - we would see red fanta bottles (filled with Fanta) kept near statues and shrines; and it wasn't just in one or two places but in many. Some sort of offering? On Googling I read that it is offered for appeasing the spirits - and red probably because it is the colour of blood meaning vitality or maybe because it is for luck - http://asktheblindpastor.wordpress.com/2011/05/12/red-fanta-offered-to-the-spirits/ 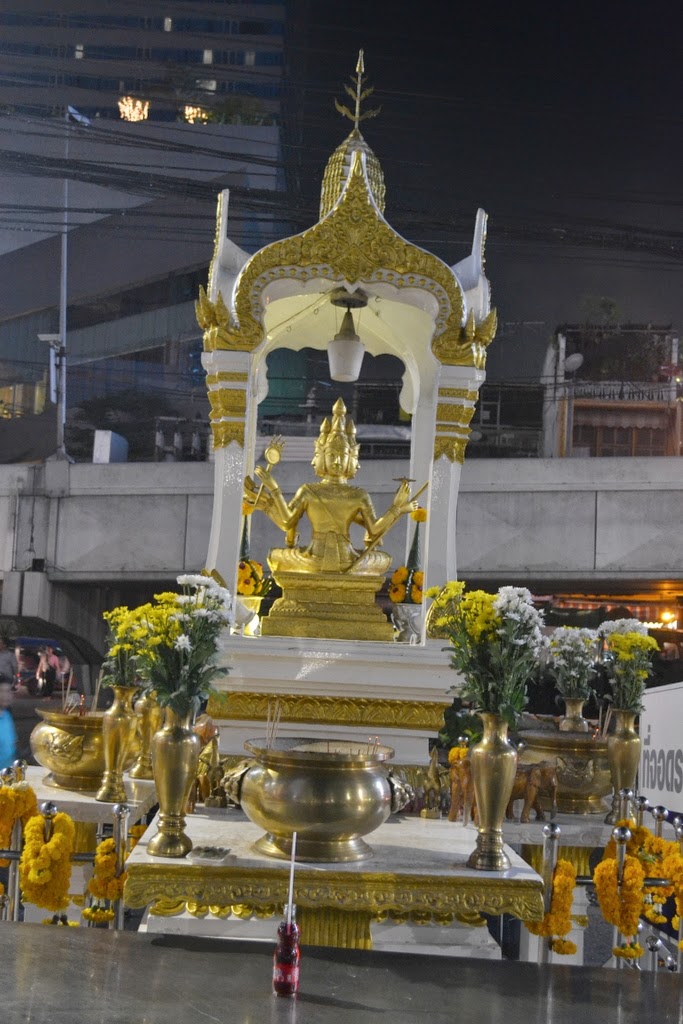 The pavement shops (left) and the red Fanta offering (right)
Posted by Unknown at 8:20 PM