The museum welcomes you with Ashoka's lion, an explanation about the number 32 (the number of spokes and its link to Buddhism), the significance of the 4 animals on the pillar (horse, elephant, bull and lion) etc.

There were two galleries I liked - one with exhibits from temples in the past and the other with Buddha related exhibits/carvings. The other galleries had things like items used during those years by people etc. - not my interest and I skimmed through them quickly. The gallery on Gods focussed on Shiva, Brahma and Vishnu. Interesting point mentioned was that though Brahma is considered the creator of the world there are very few temples in India for Brahma! Shiva in his different forms was there - the one like Bhairava was an impressive structure (Bhairava chopped one head of Brahma in anger and that's why Brahma has 4 instead of 5 heads). There was a huge unfinished structure of Shiva with 10 hands killing a demon; in one of his hands he held a bowl below because he didn't want any drop of the demon's blood to touch the Earth (else another demon would arise).

When I read about Shiva in anger I was reminded of the money incident in the temple; our Gods are also portrayed to show emotions like anger. There was one statute about Kama - the god of love who is present in the breeze. That was something new to me; he was destroyed by Shiva and later allowed to take the form of breeze.

In each gallery there was a silent staff observing the crowd - just like you had in museums around the world. The gallery on Buddha had a statue of Buddha preaching at Sarnath. I couldn't sit and admire the statue because of two foreign tourists who were listening to their Indian guide narrating a story.

What is the truth?

I overhead his story - it was the story of Gautama Buddha from his childhood onwards. I knew the story - born a prince, pampered by dad, protected by dad, married and had a kid, went on a tour of the city, witnesses what life really is outside the palace, leaves home in search of the truth, finds friends who were in a similar quest, goes to teachers in the hope of learning but ultimately left on his own, gives up worldly desires in the quest for truth, becomes famished and weak, offered food by a lady who saw him, accepts it, friends believe he has given up his quest and abandon him. At this point I was curious as to what the guide would say because this was the stage of enlightenment; Buddha had found the truth. What was the truth?

And the guide said, "That is when the Buddha found enlightenment. He was sitting under a Banyan tree; you know Banyan tree - all the branches hanging down."
"Yes yes," the ladies echoed in unison.
"He found the truth.”
That sounded a bit of an anti-climax!
He continued, “He lived both extremes - with plenty of riches and then with nothing; he experienced both states and realised that the ideal path lies in the middle. The path of the middle." 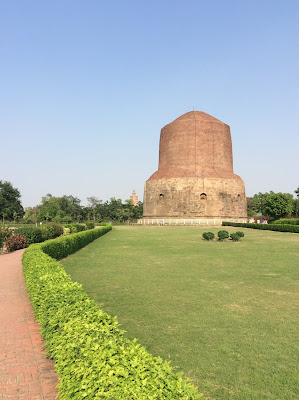 And then he continued with the rest of the story as we know it; his friends come back; his father himself listens to the enlightened Buddha and then the story goes till his death. The part about Mara (desire) wasn't mentioned. Neither were the mudras (significance of hand gestures). I finally left the hall and in the neighbouring gallery saw a group of about 10 Chinese tourists. And guess what - they had an Indian guide who was talking fluent Chinese; he was even able to answer some question that they asked in Chinese - wow; quite impressive.

I then headed outdoors to the massive Stupa - it was part of an excavated area under the Archaeological Society of India. There were spots marked were there used to be temples and monasteries. They no longer existed but the Stupa was there. It was impressive - wonder how they built this massive structure back then. Again very well maintained place; and again some couples were romancing under the shade of trees. There were a few monks who came in their traditional dark brown robes to the site - this must be a special place for them; to come to the place where the Buddha once lived. I guessed that these monks were probably from the Tibetan temple nearby.

(My ebooks available here: http://www.sstutor.com/book.aspx)
Posted by Unknown at 3:05 PM