Birla Mandir (the name outside will say Shri Vishwanath Mandir) - Called Birla temple because it was built by the Birla industries group. This is inside the Benaras Hindu University (BHU); a large sprawling campus with a lot of greenery. The minute we entered the campus I could feel a cool breeze; the effect of greenery. The temple is made of marble; it is a Shiva temple and built based on the famous Vishwanath temple in Varanasi. At the centre is a Shiva lingam. The temple is very spacious; along the walls are plenty of inscriptions - in Hindi and some in English. I read through the English ones - quotations from the Gita and Vedas. Some were quotations from the Dhammapada (a collection of quotes by the Buddha and another scripture in Buddhism). They had some quotes about God being one, about desires, about the mind, about emotions etc. Very neatly kept place and was great walking around reading the scriptures. They have a nice outdoor area as well. 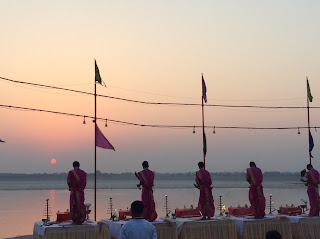 Next day I was up at 4am; 30 minutes before my alarm time. I wanted to walk to Assi Ghat to see the early morning Ganga aarti (puja). I wasn’t sure at what time it exactly was but I started from my place at 4:30am. I planned to walk the 2.5 kms by trusting Google Maps. At this hour there was no sign of daylight; the streets were dark and deserted. A few tea shops had started preparing tea for early risers; good business idea because they had barely any competition. Along the way I saw a couple of cops; there were many positioned all over the city. I got to see the sun rise in Assi Ghat; the aarti here is a smaller version of the evening aarti. Not many people, not crowded, pleasant to see the Ganga river at this early morning hour (a pleasing clear blue) with the sun rising in the background. Great sight to behold.

This early morning aarti is to provide a platform for upcoming singers and performers; and also to encourage early morning exercise. I stayed on till about 7am; after that was the carnatic music and then I guessed there would be some yoga happening. On the way back I saw a government park and went inside; this was very shabby but there were still people exercising and walking.

That concluded my short visit to Varanasi – wonderful city to experience; a city where you will surely reflect on life; one of the few places where you get to see so many funerals happening at one spot. The city is supposed to be good for sweets and snacks as well but I didn’t have the opportunity to try any of the local food. 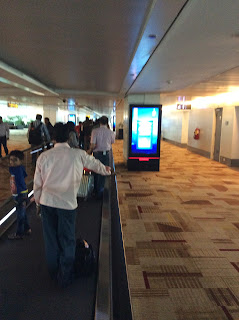 The New Delhi airport is classy unlike the airport I had used on my trip heading to Varanasi. This one looks like the Singapore airport - not yet having all the amenities but the carpet floors and infrastructure is very similar.

What happened in my return flight will likely sound cliche but it did happen. There was this father with his two young sons sitting behind me who got into a minor argument with the air hostess. The air hostess said, “You should have told me earlier.” And the father said, “That’s what my son tried to tell you before but you didn’t even listen to him.”

It was finally resolved but all through the journey you would hear the other son exclaiming about something. From their conversation I learnt that they had travelled to Singapore and Malaysia; and perhaps they were settled in one of those two countries as well. When you hear someone who has been outside India get excited over things during the flight you kind of find it surprising. If it’s a first time travel it is understandable but this seemed to be over the top; and the boy would have been around 16 years – so not too small either like a child.

When we stepped off the flight, I felt bad for the thoughts that I had earlier. The boy was being carried down the steps by two flight attendants and gently placed on a wheelchair. The boy was paralysed below his hip. Inspite of the odds, the boys had just been enjoying the flight with enthusiasm and his dad was patiently answering every question he had.

As I observed the cheerful boy's face I wondered, 'What’s wrong in enjoying every moment to the fullest extent? What’s wrong even if it is something we’ve experienced before?'

(My ebooks available here: http://www.sstutor.com/book.aspx)
Posted by Unknown at 1:39 PM