I returned to the Deer park and spent some time in the hall where the golden Buddha was seated. Four monks arrived and sat facing the Buddha. They started chanting something and I couldn't get the words. Before I started, folks said it would take an hour to cover Sarnath and that's what the auto driver estimated and that's what the tour guide said it will take. But I had already spent 2 hours here! And if I had more time, I would have actually sat down in the hall and penned my thoughts and also observed the monks. 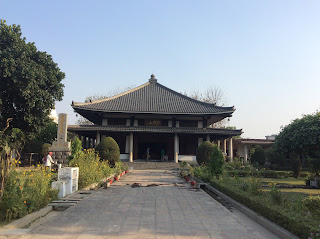 When I stepped outside the hall, my auto driver saw me.
"Babuji, saw everything?"
"Yes. I was just coming back."
"I was wondering what happened. So long. I thought you disappeared. That's why I came searching."
I laughed and got into the auto. I was glad that I did make it to Sarnath; for those who aren't interested in religion or philosophy this place would be boring. But if you are into either then there will be something here that you might enjoy - surely at least the peaceful Buddha! 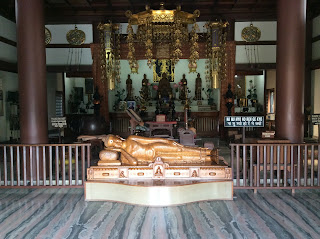 Nearby was a Japanese temple where the driver stopped and told me to take a look; this was outside the package of 7 temples that he promised to show me. The temple was a single building in distinct oriental style; inside the hall was a wooden Buddha lying down on his side. And there was an inscription that read ‘Na Mu Myo Ho Ren Ge Kyo’ - it means ‘Devotion to the Mystic Law of the Lotus Sutra’. The Lotus Sutra is a scripture in Buddhism. No crowd here; just the person who takes care of the place.

We then went to the 7 temples within the city. Some are special and I shall just mention about them.

KalBhairava - a temple for the fierce form of Shiva; the same one for whom there was a statue in the museum killing a demon. Apparently the God Brahma had ego and Shiva created this form to deal with that. You feel surprised reading about Gods showing anger and ego - all related to desire.

This temple is an extremely small temple with a central section where we have Bhairava; there is a corridor that runs around the central section where you will see swamis sitting with a lot of things like holy black strings, pictures, bells hanging from the ceiling etc. Everything inside the temple was painted orange in colour (pillars and walls). There’s a lot of sound inside and a lot of crowd packed in the small room. It is quite a sight; I had barely walked a few yards and I was drenched in sweat. So many people!

Sankat Mochan - there were plenty of monkeys on either side of the carpet that leads us to the temple. Adult monkeys and baby monkeys running around; some even stepping on the carpet. One was playing with a yoyo and two were eating nuts. Some kids were scared and clung to their parents as they entered the temple! This temple is for Hanuman; quite apt having so many monkeys around. Inside the temple is a large sweet shop; speciality seemed to be laddus. Pretty much everyone was buying a small sweet box and then waiting for the pooja to start. Some were sitting and reading from a booklet; I noticed many similar booklets stacked in racks. On closer look I learnt that they were a part of the epic Ramayana. Many people also wrote the name 'Ram' in Hindi on top of a metal grill that already had many 'Ram's.

(My ebooks available here: http://www.sstutor.com/book.aspx)
Posted by Unknown at 9:15 PM