(please click on the pics to view in full size)
Next up on our list was using the Dubai bus and Ibn Battuta mall which was on the other side of Dubai! Again it was the friendly RTA helpdesk who told us what bus to take to Rashidiya metro station. All buses had a frequency of roughly 10 minutes and so far I had never seen the same bus number arrive immediately one after the other (something we see often in Chennai!). The door slid open and we stepped inside. The buses had 2 entry points, one in the front and one in the middle. There were 2 card reader machines in both places. We placed our card on the machine and it displayed the current balance along with a beep. 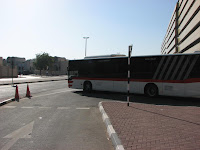 There were 3 TVs in the bus - 2 normal size ones for passengers and 1 mini TV for the driver. In our bus the passenger TVs weren't working - some problem with their input signal. The front portion of the bus was for ladies and families where you had seats facing on both sides - so you had little compartments within the bus. I took a seat in the back and noticed the Mercedes symbol engraved behind the seat (the three-pointed star which they say is supposed to mean domination over water, land and air). It was a pleasant surprise because I didn't know Mercedes had buses! I later learnt that these are Mercedes-Benz Citaro single decker buses with low floor access. The bus, which was air-conditioned, took 45 minutes to reach the main bus terminus but it was a very pleasant ride; odd it was - travelling 45 minutes in the desert under the afternoon sun and yet it was pleasant! Ibn Battuta was pretty much the last stop on the metro; in fact the station hadn't yet been completed and so we had to get down in the last station and take a feeder bus to the mall (feeder buses are regular RTA buses operated between two specific points - no intermediate stops and there was no extra charge for using the feeder bus). 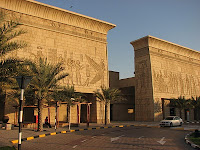 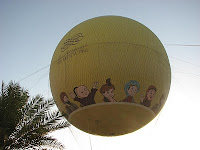 The entrance to the mall had some Egyptian carvings. There was also a large Helium balloon which unfortunately was under repair. Otherwise you can get to go up in the air in the balloon for 15 minutes! On stepping inside I learnt about Ibn Battuta - a scholar who traveled across the Islamic world - through Middle East, China, Africa and India. He is considered one of the greatest travelers in the world – he surpassed the amount of travel done by Marco Polo by a large margin and his voyage lasted around 30 years! He started at the age of 21 (wow – what were we doing at 21?!). 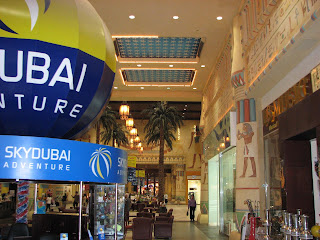 This was a themed mall with the theme being Ibn Battuta's travels and learning. The entire mall was divided into different regions (or courts) - each region being one of the areas that Ibn Battuta visited. So on entering we were in the Egypt area and the entire setting - from floor tiling, walls, pillars, trees, paintings, wall carvings to ceiling had an Egyptian feel (notice the Hieroglyphics on the wall in the pic). The first item we saw was the funny mirrors - a set of 3 mirrors that made you appear comical! Then was the armillary sphere - this is a celestial sphere consisting of many rings depicting the universe and it was used to solve astronomical problems and calculate distances. This was a large scale version of it, almost touching the ceiling. There were little kiosks were you could learn some interesting history and science. (pic of Aramillary sphere below) 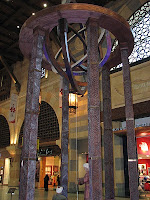 Our plan was to send my nephew and bro-in-law for Avatar movie while we would explore the mall and continue our quest for my shoe! So we rushed from the Egyptian into the Persian and then Indian court. On the way, my niece saw jelly and she became adamant over it; jelly stalls were common in all the malls and they had weird types of jellies - from snake jellies to animal jellies! The Indian court had the Taj Mahal feel; it had a huge elephant statute (that looked quite real) standing in the middle. On close examination we learnt that this was the elephant clock - an invention by the Muslim inventor Al-Jazari, somwhere around the year 1206! He wrote a book called "book of knowledge of ingenious mechanical devices". There was a video that gave a brief explanation of how the clock worked: http://www.youtube.com/watch?v=SflvgXhzu7c (this is the same video that is present in the kiosk near the clock). 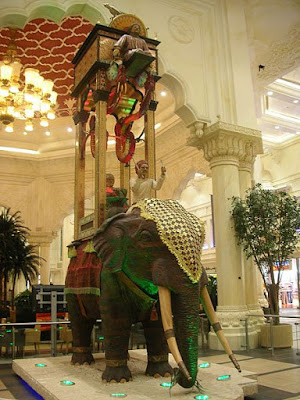 This clock in the mall is said to be a working model! Quite a grand clock and quite fascinating to watch.
And now something might click in your head – you might have seen forwards about shopping malls in Dubai having a variety of architecture; those forwards were about the Ibn Battuta mall!
(The elephant clock pic on the right is from Wiki - I didn't have a good snap of it. Notice the pillar, walls and dome...)
Posted by Unknown at 9:20 PM