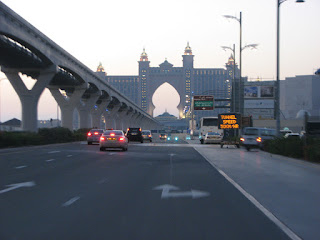 At night, after my brother-in-law returned from office we drove to Atlantis. Atlantis (called Atlantis, the Palm) is a resort on the man-made island called Palm Jumeirah (the structure in the pic is the resort). Most of you would have seen the structure of the Palm Jumeirah - the man-made island in the shape of a palm tree with branches coming out. A beautiful underwater tunnel takes you from the mainland to the island. There were plenty of residential apartments here - all of them looked similar. There was an aqua theme park and an aquarium called "The lost chamber". We headed for the aquarium. Parking was free if you bought merchandise or tickets for some minimum amount. A van took us from the parking lot to the Atlantis resort. The resort had a nice design, as seen in the snap to the left.
(Video showing the apartments on the Palm, Dubai with apartments costing even a million dollars! All the buildings will appear to be the same and you might think it is just like you find in any city - but remember that all these buildings sit on the Palm Jumeirah which is like a man-made island!)
The aquarium was housed inside the resort. The entrance to the resort seemed more like a shopping mall with the ColdStone icecream outlet right at the beginning. The place was ambient - lights were neither bright nor dim. The decorations and architecture inside gave the place a mystic feeling. The entrance rates fee for the aquarium were pretty high. The guy at the counter quoted the rate for us all and my bro-in-law said it wasn't right because he remembered seeing lower rates online. The counter guy said that these were the final rates and said it was the same quoted online. My bro-in-law then asked for discounts and on enquiring found that for a particular credit card they give a good discount. If we hadn't asked we wouldn't have got it for sure! Ask and you shall receive!
The resort room rates start from Dhs. 1600 upto 20,000 for the presidential suite! And the aquarium entrance rate is around Dhs. 100 per head! They claim to have around 65,000 species of marine life inside.
When we entered, the first item on view was a large cylindrical tank with plenty of small fishes. My niece was frightened - she feared to go near the tank. My nephew after some prodding tentatively touched the tank. The lights were very dim inside but the ambience was good - the tanks had enough light that probably made it appear to the fish as if it was still daytime - there were some weird statues and on the ceilings some weird shapes and carvings. The price was probably for the ambience! Don't expect this aquarium to be informative because none of the exhibits have a description about the fishes inside. Strange as it may sound, being present in a room with so many fishes around gave a soothing feeling - the mind felt relaxed watching fishes swimming in the huge tanks. The design was such that at certain places you feel as if you are walking under the ocean because there are fishes swimming above your head!
My favourite fish was the Nemo look alike (from Finding Nemo movie) - the orange and white striped fish looked beautiful. Even in the souvenir shop, it was the Nemo stuffed toy that looked cute. There was one area where there were horshoe crabs and few fishes in an open basin filled with water. You could touch the fishes and feel them - there was an employee present near the basin. I touched a few of the fishes but was hesitant on touching the crab. When i did touch the shell of one it didn't budge an inch. The ambience was great but the price is expensive.
http://www.atlantisthepalm.com/marineandwaterpark/thelostchambers.aspx
We stepped out into the hotel area; crossed some shops and came across a posh looking restaurant. My bro-in-law stepped in. We were courteously led by a watiress to a table. The ambience in the restaurant was also great - just the right lighting. Going thro the menu, we ordered for a large pizza and a bottle of Perrier sparkling water. I thought sparkling water meant some highly purified water but it tasted sour - it is some form of carbonated water. My bro-in-law had expereince drinking this and he liked it. The rest of us were having it for the first time and we didn't like it. They gave some bread sticks and bread slices which tasted good. These bread baskets were free with all meals - something like the masala pappad we have in Indian restaurants. The sticks were tasty and crispy. The pizza tasted great but again expensive - for the amount we spent on having a snack filler we could have had a full fledged meal for two people elsewhere - poshness costs money!
We took a few snaps, explored the mono-rail station and headed back to the Pajero.
Posted by Unknown at 10:18 PM