Next day we didn't have any plans of outing in the morning; with the amount of walking we did yesterday we had to give ourselves a little break. When there are two kids around, it so happens that you will find one in the best of moods when the other is in their best off-mood - maybe it happens with adults as well! We played some PlayStation 2 in the morning trying out a new two player game that I bought; it was more of the shoot-em-up games which would bore you in a very short time - was a reminder that it is good to check reviews of games before buying them! I put aside "The Three Musketeers" book and out of curiosity started reading "Crime and Punishment" (a novel by Fyodor Dostoevsky that is considered to be a literary classic).

In the evening we planned to go to the metro station by a bus and then take a train to Deira City Center (another mall!) - my sister called up the RTA and got the list of bus routes we could take; they warned us that the buses will take around 40 minutes since they take a circuitous route. A taxi ride to the station would take just 10 minutes! Long before I had planned for this trip, I had received an email forward about Dubai bus stops. And ever since then I'ev been quite curious to step inside one. The bus stop was hardly 5 minutes from our home. It had a slightly weird curved shape similar to the outline of Burj-Al-Arab (a 7 star hotel which is the second tallest hotel building in the world); the shape is similar to that of a sail. 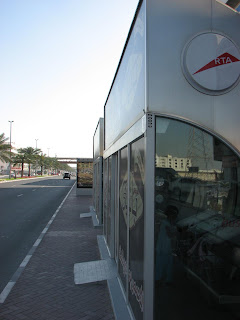 There was a machine near the bus stop which could be used for checking your Nol card balance and recharging it (the RTA cards are called Nol cards). We placed our red card on the card reader area and the machine said "Invalid card". We tried flipping it around in all directions but the message was the same. Another person said, "You can only recharge the silver cards." But my sister insisted that she saw a couple of guys recharge their red cards yesterday. She called up RTA and they said that red cards could also be used. Finally, since it wasn't working, we tried to get a new silver card which cost Dhs. 20 each; after inserting the money, the machine displayed Dhs. 60 and then said something like ‘insufficient money’. We tried different denominations of currency and different number of cards but the result was the same. A couple of Filipino ladies who appeared to be regular users also tried for us but failed. I had a feeling that the machine probably didn't have silver cards in stock and the error message was wrong - minor bug in the software! There was another bus stop on the other side of the road but that didn't have a recharge machine.

"Maybe we can ask the bus driver and see."
As a bus slowed down to stop, I hurried inside and asked, "Can we use the red card?"
"No."
"Do you accept cash?"
"No, only card."
"The machine here isn't giving new cards."
"You can still come but if they check somewhere then it will be a problem."

The bus stop was fu 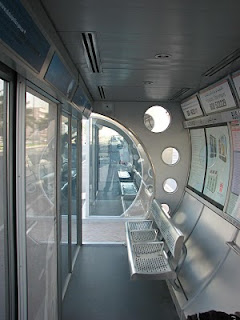 lly air-conditioned and even though it was very hot outside, I felt chill inside after just a couple of minutes! There was a sliding door that ensured the door wouldn't be open unless you pushed it. Inside the stop was a large RTA map with bus route numbers and a nice bench that appeared to be metallic but was comfortable to sit on. There were a couple of ads and a button that said "Press at night if you want the bus to stop" - the button would light up the bus stop!

20 minutes after leaving home, we took a taxi to the metro station at the airport - this was closer than Rashidiya station. There was one duty free shop at the entrance of the terminal building and we jumped in to see if they had honey roasted cashews – something that all of us loved. The airport here was different from our Chennai airport where only passengers are permitted to step inside - here anyone could walk inside up to a certain extent. We had to settle with a couple of packets of caramel roasted cashews.

We took the escalator up to the metro station and the lady at the counter told us that red cards couldn't be used in buses. She advised us to get the silver cards because they would work out cheaper than the red cards - we didn't fully understand her explanation of how cheap it would be but it seemed that the fares on the red card were costly across zones. We bought 4 silver cards (the cards are just like a credit card) and hopped onto the metro - the familiar voice announced, "The next station is Deira City center."

Inside the train, I glanced at the map and learnt that Dubai was divided into 4 zones. Now it made sense – the rates for using RTA service was based on whether you were travelling within the same zone or across zones. Our trip cost around Dhs. 3 per head.
Posted by Unknown at 1:51 PM