(Note: You can click on pictures to see the full size)

We skimmed through the Festival City mall for an hour not having anything specific in mind. I saw a Pierre Cardin outlet which had a sale offer. The price of shirts on sale was quite similar to that in India except that the brand was different. My sister asked me to pick up a shirt but I felt it would be better to check prices elsewhere. The mall was quite huge but since we had to get back home for lunch, we decided to return at 11:30. I spotted a ColdStone outlet just as we were searching for the main exit. It reminded me of the outlet in New York and I still remember my friend telling me back then that it was one of the best in ice creams. We hopped in and I ordered my favourite strawberry milkshake. Children don't like it when you buy something and they don't; so my niece got a vanilla milkshake. I won't tell you the price but I'll tell you how they made it! 3 scoops of strawberry ice cream, a few pieces of strawberry along with creamy milk in a blender - pure milkshake that was very thick and tasty. The guy even played with the ice scream scoop, tossing it in the air and catching it!

We hopped onto a Dubai Taxi that was waiting outside the mall - the driver was a Pakistani dressed in a formal suit with tie. This was something new - 10 years back you wouldn't see such professionally dressed drivers. The meter started at Dhs. 3 but there was a note stuck on the dashboard that read "In case meter is not operated, the ride is free. The minimum fare is Dhs 10"! Seeing my niece having a big cup of milkshake in hand, he politely said, "Please be careful. Don't drop it on the seat - the stain won't go". I took almost an hour to finish the milkshake - sipping it slowly and ensuring that I didn't let the chillness hit my throat directly; oh ya, I still did have a sore throat! I could hardly eat lunch - it was so heavy.

Our evening plan was to use the metro to 'Mall of the Emirates'. My sister had never used the bus or metro and so we ca 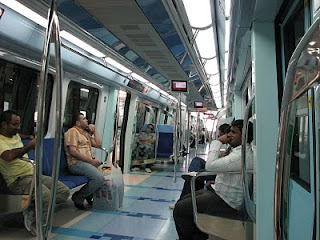 lled up the RTA (Road and Transport Authority) and asked them the route. We took a taxi to the Rashidya bus station from where we could take a metro train directly to Mall of the Emirates. In the station we bought a temporary red card, costing around Dhs 4 per head, that could be used for one travel. The metro was well maintained and clean - it reminded me of the metro at Washington. Even here the train route was called the "Red line". The difference compared to Washington was that here there were more staff and security available to help you in case you had any trouble with the swipe machines or directions. We bought the card, swiped it on a turnstile machine (you need to cross the turnstile to enter the area for boarding the train) and boarded the train. There were around 7 compartments and since this was the first station, all of us got a seat. Seats were comfortable and the entire train appeared relatively new. A pre-recorded voice announced, "The next station is Airport Terminal 3". There was a small TV in each compartment which mentioned what the next station was and there was a map that showed the list of stops on the red line. 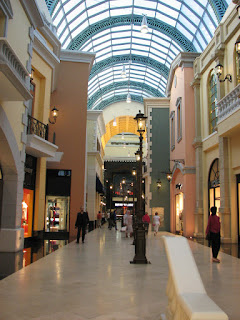 (Picture: Mall of the Emirates) (Video: The metro)

Mall of Emirates was at the other end of Dubai - it would be a long metro ride! The train was just full - a few people standing and considering the amount of difference between taxi and metro I could see why; the same drive on taxi might have cost well over Dhs 25 but on the metro it cost just Dhs 4 or so. I enjoyed the ride so much that I actually dozed off for a few minutes! When we crossed over to the other side of Dubai and came close to the Burj Khalifa I woke up. There was a stop here "The next station is Burj Khalifa"; the tallest man made structure ever built. It stood pretty much in the center of the city and was towering over every other building nearby. It took around 40 minutes to reach Mall of the Emirates. There was another set of turnstile machines where we swiped our card and the money for the trip was deducted from the card.

A lengthy passageway connected the terminal station to the mall. We saw so 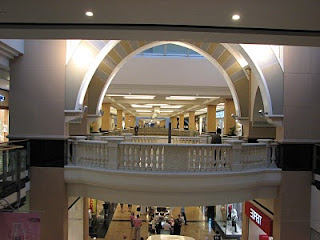 me mementos but didn't buy them (I guess I'm better than women when it comes to shopping - I take a lot longer time to assess and buy things!), hopped into a couple of electronics shops (DJ Sharaf, EMax were big players in this area) and also the food court for dinner. There was even a small rollercoaster for kids within the mall! You had a variety of food outlets ranging from McDonalds to typical restaurants. I decided to try Lebanese food. It took well over 10 minutes for the food to be prepared. When they placed the tray on the table, I felt it was a little less - a few pieces of chicken along with some french fries, hummus (it's a kind of cream made using gram seeds and sesame seeds) and some veggie leaves. Just as I was about to pick the tray, the guy at the counter placed 2 huge slices of bread on the tray (they call it bread but it was like naan with sesame seeds on top and very soft). Oh boy, and my bro-in-law and I together couldn't finish it; we ended up packing the bread! But certainly it is a cuisine that you should try out - hummus is yummy!
Posted by Unknown at 11:41 PM

Hey..ur blogs are making me feel totally nostalgic..feel like a trip to AUH/DXB and all the emirates..Btw ..didnt the Lebanese place have Shwarma??

:-)
yup - it did have shwarama; but we went for a normal dish just to try out something different

next time try muthabbal...its damn yummy...much more than hummus..its made out of brinjal..u wont believe its brinjal made to a paste

I am tempted to make a trip in the near future. BTW....any effects of the credit crisis that was visible there?

Hey Karthik; yes u should - nice place to visit and I'm sure u can do some research in dubai thro the eyes of an mba pro :-) ya; signs of the strain are visible because some construction projects are on hold but they are getting back on track...i'll touch upon it in the course of the blog - and about IT as well :-)

Hmm...muthabbal; sure, i'll keep that in mind - will try to check out in some arabic restaurant here itself