Though we were now in Dubai and I had spent most of my years in Abu Dhabi, I still felt nostalgic to just be back in this country. There was still a decent amount of greenery in the city - almost all roundabouts were filled with grass and you could find roads also lined with trees; the place is supposed to be a desert but you would probably find more greenery here than what we see in Chennai! There were plenty of vehicles but no signs of smog in the air - maybe the use of cleaner fuel, efficient engines and petrol instead of diesel helped. My bro-in-law said that during peak hours traffic gets very heavy in certain signals but so far I hadn't seen a traffic jam.
My nose was feeling uneasy. It was probably the effect of alternating between complete AC indoors and heat outside. My throat was also a bit sore - falling sick in travel is really bad; getting treatment in a foreign land pretty much ruins your trip; vacation would then turn into sick leave! Maybe a good rest will do wonders. After a nice lunch at home, I don't know when I drifted to sleep - at night watched a little IPL (on a channel called CricOne), had dinner and went back to bed. Television service was provided through a service called e-vision by Etisalat (the main telecom provider in UAE) - service is similar to TataSky or DishTV out here but I felt the menu looked primitive when compared to TataSky.

In the morning, exercise here seemed a lot better than back in Chennai - maybe it was the centralized ac effect or maybe the spacious room or maybe it was something to do with the mind. The body felt a lot more flexible than usual. But my throat didn't feel any better - there was a slight pain and even a leaky nose had developed. I stayed the whole day at home spending time preparing a list of places to visit by researching on the internet about UAE (people often confuse UAE and Dubai - Dubai is just one of the main cities in the country UAE - United Arab Emirates). The other major cities are Abu Dhabi (the capital), Sharjah (just 20 minutes from Dubai) and Al Ain. Watched IPL, discussed places to visit with my bro-in-law and sister and slept.

By 8am, bro-in-law dropped us in Festival City on the way to office. Dubai Festival city is supposed to be developed as a city within a city. But the main attraction for now is the Festival Waterfront Centre which is like 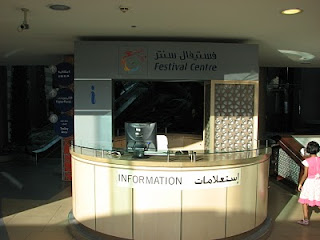 a large shopping mall with a lot of area being occupied by IKEA (an international furniture retailer) and HyperPanda supermarket. Our idea was to have the famous and cheap IKEA breakfast, roam around the mall and head back home for lunch. We thought that eating outlets would open for breakfast but we were wrong - IKEA canteen would open only at 9:30 and all shops were closed. There were a few cleaners, some visitors who probably landed here unaware of mall timings like us and some people who appeared to be regulars in this place - I wonder what they did with all shops closed. Half an hour my sister spent in making my niece eat her packed home food while I read "The 3 musketeers"; carrying a book in my backpack comes handy in these situations! We then took a few snaps in the mall, picked up a trolley in which my niece jumped in and we roamed around the mall looking to see which shops would open first. In the top floor, even the food court was closed. At 9am the employees had opened their shutters but they said they would start serving only at 10! On the way, I saw a 3D tv on display - the future of television; standing too close to the tv made the images appear in double; but if you went some distance back then you could feel the 3d effect - no need of special glasses! But I wasn't too convinced that moving images appeared in 3d; it would probably take some time to perfect the tv.

There was a cinema complex on the top floor and there was also a fitness center. Now it made sense as to why some people turned up so early out he 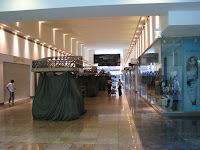 re! The mall was clean, large and similar to a US mall. At 9:40 we went to the canteen in IKEA where they served breakfast for Dhs 4 (currency is Dirham and 1 Dirham = Rs 12.5 approx). Well, please don't start converting the money and complain that Rs 50 is too much for breakfast - in Dubai Dhs 4 was relatively cheap. You could pick any 4 items from the tray -baked beans, potato wedges, sausages, omelettes and mushrooms. We picked the veggie items with extra potato wedges (potato wedges is like a large crispy French fry!). Baked beans was the best - its been long since I tasted it (it's basically beans soaked in a form of tomato sauce and it is yummy; you get this as a canned product in US and Europe). My niece and I emptied a few tiny cups of condensed milk that is supposed to be used for tea - condensed milk also tastes yummy but this one was skimmed milk and so didn't have the usual thickness of condensed milk. There were plenty of people in the IKEA canteen - many Westerners having sandwiches, sausages and tea. 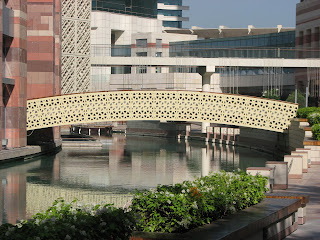 My sister said that the mall had an abra ride - Abra is a traditional Arabic boat; the mall had a couple of Abras with motors to provide a free 10 minute ride. I was surprised that it was free. After asking a few people and referring to the signposts in the mall, we reached the abra place (spot the abra in the pic). But there were only a couple of staff over there and they informed us that the service starts only at 3pm since the Abra operators (drivers) were available only after 3. I chatted with an Indian employee, who worked in the Abra service for a 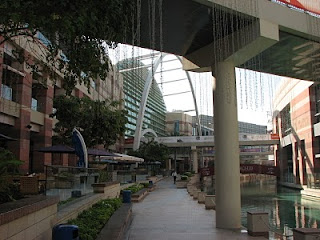 few minutes before heading back to the mall. Communication was in Hindi and knowledge of Hindi certainly comes in handy because we can even communicate with Pakistanis since Urdu is quite similar to Hindi.

(This pic is the other side of the water stretch; to left of the pic is the mall)
Posted by Unknown at 10:30 PM

PS: Any plans to get settled soon?

Thanks BPL; plans are there but when I don't know :-)