We landed well in advance of the scheduled arrival time. It was 5:30am local time (7am Indian time). Temperature was around 20 degrees Celsius - deserts are cold at night! Though we touched down on the runway, there was a considerable delay before the staircase was attached to the flight for us to get down. I took the chance to play another chess game but couldn't complete it. In the first class area, each seat was like a little cabin - not fully covered but designed such that you would feel alone in your seat and you could lie down fully flat like a bed.
We descended down the stairs from the flight onto the tarmac. There were a couple of airport buses waiting to take us to the airport. As the vehicle moved around, I realized how huge Dubai airport was - there were umpteen Emirates flights waiting on the runway, plenty of empty runway space, another airport terminal under construction and the entire place seemed humungous.

Most passengers took the escalator having the sign "connecting flight" while just four of us went to the "arrivals" area. The inside was just as huge as the outside - I took two lengthy escalators to reach the immigration area. Most officials were dressed in the traditional Thobe (also called a dishdasha - a lengthy loose fitting white robe). There were a lot more counters than in Chennai. The lady immigration officer in the first counter scrutinized my passport and visa document and said something that I couldn't follow. I asked her a couple of times and both times I couldn't figure out what she meant - she said something that sounded like "sca" or maybe it was "sta" or "station". It was hard to follow her accent and I didn't feel there was any point in me asking repeatedly. She then said "Go straight over there" - was something wrong with my documents? Or was something wrong with my passport? In a foreign land, you get a little jittery in such situations that involve immigration - you could get deported if the officers feel suspicious!

I went straight past 5 counters beyond which there were 10 unmanned counters. I asked another official, who was walking nearby, where I was supposed to go and he said "Just stand in the queue". He didn't listen to my story and repeated "go back in the queue". I stepped into another queue which moved slowly. And after half an hour when I reached the counter, the guy said, "Why haven't you done the eye scan?". Ah ha, now it made sense what the other lady said! "Go straight and right".

The official here was neatly dressed in a suit, seated beside a bionic eye at the eye scan counter. You had to look into the bionic eye and the bionic eye will take a picture of your eye for official records. The man put a stamp on the visa document and back I was at the immigration counter. This time it was another lady staff and she quizzed me about where I would be staying and the telphone number. And with that she handed me back with the passport and visa document - I was free to enter Dubai.
Next up I had to pick my checked-in baggage from the luggage conveyor belt which would keep moving in a circle till the belt was empty. Every airplane would dump their baggage on a separate conveyor belt for passengers to pick up. Sometimes when only a few baggage remained unclaimed, the staff would put the baggage on the floor and stop the conveyor belt. Surprisingly, even after such a long time the conveyor belt was moving and there were just 7 or 8 luggage left. I noticed that there were a couple of Indian girls as well who were delayed just like me. Unfortunately we never came within hearing distance to strike a conversation! The airport was huge - Terminal 3 is the single largest building in the world based on floor space.
My brother-in-law and family were waiting for me outside the terminal. The parking lot was also huge; spread over a couple of floors. Even the parking lot had changed – we never had parking meters back then. We drove home, which was near the airport on the Deira side, in a Pajero and I was amazed by the width of roads. It's been more than 11 years since I've been here but I don't think Dubai had such huge roads back then - now it was wide 5 lane roads instead of the regular 3 lane roads. The city used to be centered around two areas - Bur Dubai and Deira Dubai which were separated by the Dubai Creek. But now it appeared like the city was spread out on both sides beyond these areas. 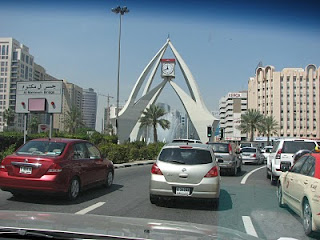 We were soon at home and then drove to a bank near the Dubai clocktower - the clocktower on Deira side was still the same. It was around 30 degrees outside while every building, room and vehicle was air conditioned.
Posted by Unknown at 10:25 PM

11 Years is a long time you are going to a place. Its almost a new place you go and see. But tell me which made you more happy seeing: The changed new look of this place. or The Dubai clocktower, which stands still the same. And if you can, please do add some pics.

Thanks for reminding abt pics - have added a pic to the blog; will soon put up an album; its nice to see some of the old landmarks because if none of them were there we wouldn't remember the old city!

Thanks Raj; will try to add more snaps from the next edition

Did you Visit Burj dubai.

I did visit and didn't visit it :-) The story of Burj Dubai will come soon.