We got into conversation with the burly driver of Pakistani origin. As darkness set, we could see a lot more people on the streets. He strictly followed the traffic rules and we discussed about the plight back home.
“Over here if someone comes from a side road, we will wait for them to turn and go in front. But there no one will. Basic road sense everyone has.” 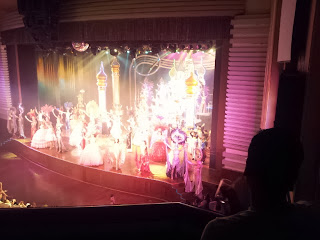 True; back home everyone seems to be in a hurry as if the whole world depends on them reaching their destination 10 seconds early. The driver said that he goes to Pakistan only occasionally – he was well settled in Thailand. We discussed about development and corruption back home; and I guess the state was similar in both our countries. Soon we were into a street that seemed like a main road based on the amount of shops and lights on the sides. He parked the taxi in a parking lot and asked us to follow him.

The Alcazar show is a cabaret show – you get to pick a drink (flavoured orange juice) and watch the show in a huge indoor auditorium; the lower level seating and the ones close to the stage cost a little more than the balcony seats. There were plenty of families, couples and even elderly folks in the audience. The show mostly consists of dance performances with one or two comedy acts or mimes. We got to watch a mime which depicted a conversation between a guy and a girl – the stage setting was simple; completely black curtain and the spotlight would shift from the guy to the girl – at any given time you can only see one character because the rest of the stage is pitch dark. The surprise was right at the end of the act – it was a guy who was acting as both the guy and the girl; one half he had makeup of a guy and the other half as a girl – quite fascinating it was.

The rest of the show was filled with group dances. The dance itself wasn’t that great but the costumes, backdrops and stage decorations were very well done. Background music was mostly English and a little Thai; there were even a couple of Bollywood songs – obviously to attract the Indian crowd. Few memorable ones were the James Bond song “world is not enough” for which they lowered a large dome with plenty of holes from the ceiling; the light from the center of the dome made patterns outside the dome as the dome kept spinning. Another one was a museum setting where the performers were completely painted in grey and looked like statues before they suddenly started dancing. 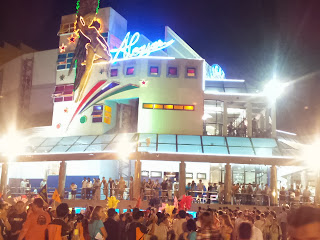 In Pattaya you will find a lot of transgenders on the streets from late in the evening. And many of Alcazar performers are transgenders – they do use a lot of heavy makeup and at the end of the show you can see them up close; you can also take snaps with them but not for free. Couple of our guys tried – our expert waved a 10-Baht note but the lady was definitely not interested in that; our photographer tried 40 Bahts and he was successful in getting her to pose for a snap with him. You might read in some places that the transgenders will force you to give money after the show but that isn’t true. Similar to the Alcazar there are a couple of other shows like a Russian show which runs at about the same time (around 8pm); but from what I heard from the driver, they are not for family audience!
(pick above is from the outside)
Posted by Unknown at 11:39 AM