Thailand thrives on tourism and this can be seen in the well-connected network of operators. From the list of alternatives that our hotel host showed us, we picked ‘Nong Nooch garden’ for our afternoon trip. He said he’ll call the tour organizer to pick us and then he told us that it will cost slightly more than the listed price on his catalog since we were late. Not having any choice we accepted – point to note is that if you were to go on your own to Nong Nooch garden, the official entrance fee is more than what this intermediate tour guy was asking for.

Typically all hotels have a tie up with a tour provider; the tour provider will pick you up by cab or van (might pick few other people from other hotels) and take you to the destination. He will get you the entrance tickets since he has a tie-up with the park/garden/event. This wasn’t just in Pattaya but even in Bangkok it was the same – hotel, cab drivers, tourist guys and tourist attraction spots are part of a network; it makes the life of a visitor easy because you don’t need to argue over prices with cab drivers and all – it’s a flat rate and they take care of you till you return.

We strolled on the streets near our hotel and drank some fruit juice from a roadside vendor - a very common sight in Thailand. The tour van guy took us to Nong Nooch – about 30 mins. drive from our place. Conversation with the driver was difficult due to language barrier! 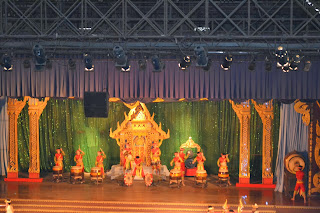 The driver rushed us off to the Thai cultural show which was in a large auditorium with plenty of fans to keep the audience cool; the fans would also blow a few drops of water to cool the place. We went to the last row on the top (the only one free) and people even stood on the benches to view the performance on the stage – there was a demo of kickboxing, a show with elephants and a cultural dance; the dresses they wore were similar to the ones we saw in the textile museum. After this we rushed for the elephant show – on the way was a park staff with a medium sized tiger lying near him. 200 Bahts for taking a snap with the tiger! It was obvious that the tiger was drugged and I felt pity for the animal; the way the staff slapped it once in a while to make it wake up to pose for a snap.

Soon we were in an open air auditorium where plenty of elephants were paraded – I don’t think I’ve ever seen like 30 elephants at a time. They did some basketball, bowling, shooting, painting and dancing. There were little boys (like the ones we see in India in small restaurants cleaning tables) who were running around selling bananas to the audience for feeding the elephants. And if you bought one, the guys handling the elephants will make sure that the elephant comes to you. Was fun on one side but on the other you feel a little bad – for the elephants and for the kids; I wonder how much of training the elephants must have had to undergo to do these tasks which is so unnatural for them – and here we were, the audience with Asians and westerners applauding the spectacle! Huh! 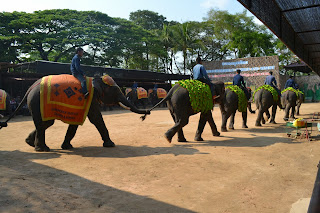 I was reminded of Planet of the Apes while I watched the spectacle of the crowd cheering the elephants. What if the situation were reversed? – if we had rings on our necks and were being prodded to do things like climbing and swinging from trees while another species applauded, made fun of us and enjoyed the show?
To add to the fun, a few members from the audience were picked for a few acts – like asking the person to lie down while the elephant stepped across their body. There did seem to be some partiality in the way the participants were picked!

After the elephant show we were free to wander the gardens which is the primary highlight of Nong Nooch. We took a semi-bus ride that had two stops while it took us through a few sections of the garden (the garden is huge); it was well maintained and there was a lot of garden designing – like the way the grass was trimmed in particular shapes. Along with this they did some add-on work like keeping animal models etc. They had created something out of almost nothing – the way it was packaged and designed, attracted crowds. In a lot of places we saw vendors with trolleys selling coconut water – similar to what you see in India but they had a unique touch – the coconuts were neatly shaved on the top for an elegant look and they were stored in ice; they cost more than in India but with that form of packaging people are willing to pay more.

We really didn’t have much time to loiter a lot; our cabbie told us to return by 5:30pm. After taking dozens of snaps with different artifacts we left the place. As we stepped out, there was a group of transgenders in colorful attire stepping down from a bus – this is a common sight in Pattaya. All through the ride our photographer and our ‘expert’ debated on their photography skills by taking different snaps; very soon we stopped outside a gigantic building which seemed like a hotel with a few pretty faces welcoming us. We thought there was some mistake – did the driver forget our hotel? The driver using sign language insisted that we step out. A man in coat, standing beside the pretty faces spoke decent English and welcomed us. When I saw the entrance I realized that we were into the next scam that Thailand is popular for – the gem scam! This place was a gem factory – the interiors were posh and you had a typical hotel style reception desk with everyone dressed in smart formals and having an ‘always-smiling’ face. A host led us to a medium sized room and switched off the lights. It was a mini-theatre. This was just the beginning – when you know about scams and you land up in one, you have mixed feelings – a little worried and a little thrilled.
Posted by Unknown at 2:26 PM