After visiting one of the bigger shopping malls in Pattaya (nothing great - and prices also weren’t anything great), we found an Indian restaurant while roaming around the main road; our veggie friend was delighted and the aloo parathas they served were pretty good. The Pakistani driver had left us - once the tour operators know that you aren’t going to go to any other attractions, they will want to leave because they won’t get any more commission because of you. Even for getting tourists or visitors to certain massage centers (called honey massage) they get commission. Do beware because these aren’t the typical massage centers that you see in Bangkok - these do cost a lot of money (over 2000 Bahts) and they are very popular in Pattaya. Tourists operators will try their best to push you into these places.

Our next stop was Walking street and this was near our hotel. To get back to our hotel we jumped into one of the local tuk-tusk (a tuk tuk is an auto-rickshaw); the ones in Pattaya were lengthy in the back with two rows of seats facing each other. They run around the city like share-autos and you can get off anywhere along their route. An Australian passenger joined us and he got started about cricket and the pathetic performance of the Australian team in India. He told us which stop is Walking Street - it’s not hard to find; it is the most crowded street in Pattaya at night and if you walk a few steps inside you will see a board saying ‘Walking Street’. There were a few police cops standing at the entrance. 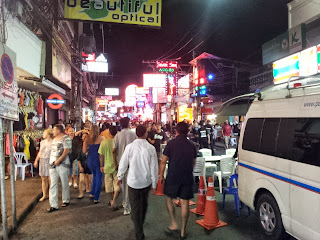 street are pubs and dance bars or a combo of both. Some of the pubs have very loud music and you’ll sometimes find a few people dancing on the street outside the pub. There are plenty of transgenders and like our hotel owner had said, sometimes they will look more pretty than women! And guys had got into problems thinking so. Some dance bars have been setup with showcase areas - it’s like in clothing stores you have dummy models with dress placed behind see through wall; over here instead of the dummies there are real women or transgenders swaying to music coming from the bar inside. It’s to attract people to enter the bar. Some bars have setup balconies from where these live models try to attract attention of the crowd below. All these bars with models dancing tend to charge a lot more money for drinks - so beware; and it isn’t nice practice if you step into one of these outlets, sit and watch the dancing and then leave the place without buying anything! Most of these outlets try to attract Westerners; there is the belief out here that Indians will not spend much money. So even on the street, the women and transgenders will flirt with Westerners.

Another common sight is that of single elderly Western men sitting with a young Asian girl having a drink. And from the many instances that we saw, it seemed like the men were doing all the talking while the women were just listening (or appeared to be listening!) The men probably wanted someone to whom they could pour out their mind. A lot of Westerners tend to spend a few months in Thailand when the winters in their native country is harsh - the cost of living here is a lot less than in Europe or US; it costs about $10 per night if you take up monthly accommodation in Pattaya.

There is another scam out here that is common in this street - I had read about it and here we saw a few guys who seemed to be a part of it. Local guys will run up to you and show a menu card - it’s not a regular food menu card but will have a list of a-rated items with price tags. Beware of these; they will tell customers that they can watch whatever they picked. They’ll take the victims to somewhere upstairs on one of the buildings, play some little video or maybe nothing at all and demand money from the victim; being surrounded by the local guys there is no option but to pay and leave!
Posted by Unknown at 10:10 AM