A beautiful peacock beyond words

It wasn’t long before the host just closed the door while we were only 4 people in the medium sized theatre. A video started playing which showed how gems are extracted, cleaned, polished and cut; it also mentioned about how gems are valued and parameters to look at while selecting gems - kind of similar to what they say for diamonds; about cut, clarity, carat etc.

Once the video was over (not too long), the host led us outside down a long passageway. On the way were a few pictures on gems; the passageway connected to another passageway. Behind us I could see that another employee was guiding another set of tourists into the theatre. This passageway had a few showpiece items made of gems - the most beautiful sight was that of a peacock built with gemstone crystals (height of about 3 feet); it was simply dazzling - blue, green, purple and a variety of colors shining under the lights. The cost was somewhere in the range of Rs. 20 lakhs or so. On the other end of the passage were a pair of serpents related to the Chinese calendar; they also looked majestic but I found the peacock more fascinating. You could just stand and observe it for a few hours without feeling tired - unfortunately photos aren’t allowed inside this gem factory.

Next the host led us into a huge hall that had plenty of items on display like a jewelry shop - necklaces, rings etc.; everything with some gemstone embedded. Our expert enquired about one of his lucky gemstones and the host led us to a place where there were a few rings with the gemstone. I don’t think I’ve ever seen a floor that is so huge with so many display items – there were even showpiece items; price ranged from few hundred Rupees to a few thousands.

Now you may ask, what’s the scam in this? You need to beware of what the salesman say; very often the item shown is not genuine; in fact in some gem factories, they will even say that the gems here cost a fraction of what is their original cost and they will tempt you to buy it by saying that you can make a lot of money back home; and many people have fallen to the persuasion. You are not forced to buy but the salesmen will put pressure – in our case the host kept following us and leading us to different sections in the hope that we might pick something; but I don’t think he was that enthusiastic about us since he might have had the feeling that we weren’t a group that would buy something. The tour operators and travel guys have some deal with the gem factories - their duty is to bring as many tourists as they can; so you don’t even need to pay the travel guy for bringing you there because the gem factory will reward him for bringing people. 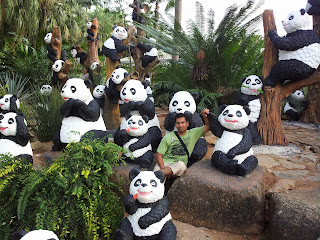 The whole operation (gem scam) is very well organized; when we came outside we really didn’t have to tell anyone to call our cab driver – in a few minutes our cab arrived from the parking lot. And as we got in, I could see a few other travelers being dropped at the entrance to the gem factory.

It was around 5pm when we reached our hotel; the plan for the night was to attend the Alcazar show. When we told our hotel owner (he was owner, cashier, waiter and receptionist as well!) he suddenly said, “Oh, but the 7-o-clock show is sold out.”

We were disappointed, especially our ‘veggie’ friend because he had heard a lot about the Alcazar show and was told that there was no other show equal to it in Thailand; not even the Tiffany show in Bangkok. We went to our room and a couple of them went for a shower while one person slept off. I got a call from the owner saying, “I can get you tickets for the 7-o-clock show.” Our veggie friend was delighted. But having happened the second time in the day we were suspicious; he did the same for Nong Nooch as well.

“I think it’s part of their plan. If you ask just before the event, they will say no tickets. They make you feel as if it is very hard to get a ticket and then they’ll say it’s available at the last minute and charge extra.”

“But price is still ok.”

That was true; we knew the official rates and what he quoted was still around the same figure - 600 Bahts.

The four of us got ready; we had heard enough stories from our owner about safety and we had also read things online which made us leave a good amount of cash and card in the electronic locker in our room. Out of the same fear our photographer left his camera in the room as well. The owner demonstrated how the locker worked. Soon we were in the lobby where we paid the owner and our ‘expert’ had a can of beer while we waited. The owner handed us over to a lanky local who led the way to the main road. The four of us waited for our pickup car which was driven by a man of Pakistani origin.

Our night adventure had just begun!
Posted by Unknown at 3:06 PM