It has been a while since I updated the travelogue - excuses are that I was doing some freelance writing and also working on a novel; but the reality might just be Newton's first law of motion - inertia (translate that to laziness for humans!) Anyway, am back and here we go...
SAFARI gone wrong
We had booked for a desert safari ride - something that I had never been on even when I was a kid. There are numerous operators who arrange desert safaris and it helps doing your research on the rates that each one charge. In fact there are some that might not be advertised; so ask around you shall get information! Get the list of prices from all operators, some give discounts for group bookings, rates might be higher on weekends (Thursday and Friday) and you need to book in advance if you want to go on a weekend. After my bro-in-law returned from office, we packed up and headed for the Pajaero that was sent to pick us up for the desert safari. We were in for a surprise - there was a European couple who had occupied 2 seats; well, that meant 4 people would have to squeeze in the middle seat and the 2 kids would need to sit in the back. We protested and called the operator - he asked us to adjust; uh, "adjust" - Indians probably are the ones who are used to this 'adjust'ment always. My bro-in-law complained to the operator and we told that we're dropping out; what's the point of paying money and travelling uncomfortably for an hour.
PLAN CHANGE 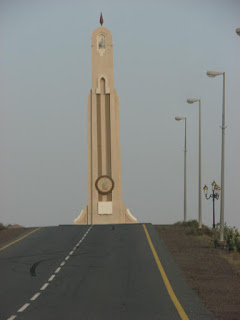 Since we had already packed up, my bro-in-law said we'll drive to Fujairah on our own vehicle for the weekend. Picking up some more stuff (like beach shovel and bucket), we started out. We had to go through Sharjah. There was a lot of desert during the drive and in some places we could even see camels walking at a distance. First point of interest was a tall obelisk that seemed like the Washington monument. There was a path going towards the structure and we took it. And guess what - this was called 'the Sharjah Monument'! It isn't as tall as the US monument - just a fraction of the height but it still stood out on the Sharjah Dhaid highway. The sun set was beautiful, it was 6pm. Fujairah was arond 3 hours from Dubai and our plan was to reach there at night, stay in a hotel and continue the journey in the morning and by evening head back to Dubai. At 7pm, we stopped at a road side veggie and fruits souq (a souq is a commerical market). There were plenty of fresh foods to snack on.
Hunt for the elusive hotel!
Around 8pm we were into Fujairah and had to find a good hotel. My bro-in-law preferred staying in one of the reputed hotels like Hilton or Meridien. I had a small map in hand which I tried to use to map out the direction we were going in. The board signs were few, and so we went by the map and finally did reach Hilton - it was beside the beach. My bro-in-law tried to get a corporate discount but they didn't have any offers. Since according to the map, the Meridien was supposed to be nearby further down the same road, we thought of checking that out. Just past Hilton was the Sandy Beach resort - we went in but the rates were pretty high and the only extra facility they had was a swimming pool. There was a board which said "JAL resort" - following that got us nowhere - the board was there in 3 places or so but nothing led us to the JAL resort! The problem is that you don't have any roadside shops or taxi stalls where you can ask someone for directions. After an hour of hunting for JAL we gave up; next destination was Meridien. On the way was the beach to our right and we had our dinner in a restaurant on the beach side. They had some crabs and lobsters on display, stored in ice; you could pick what you wanted and they'd cook it for you! The place had a weird stench on one side; the stench of fish or something. I wondered how people sat in that area; maybe they had got used to the smell!
Searching for the Meridien which was straight down the Hilton road took us somewhere to Khor Fakkan (a scenic coastal city). Scenic in the day; at night there wasn't much to see. Fujairah had a port and we could see these huge containers along the coast which were used for storage in export operations. The UAE mainly exported oil and my bro-in-law said that those huge containers were used by the oil industry for storage.
As we drove on and on we came to a road that went straight into the darkness though it appeared that there might be a bend to the left - on our right was a railing beyond which was the sea and there were hardly any street lights up front; on our left there was a small building in the rocks - it looked grand in lights. At this point we felt it better to turn back - it did seem risky continuing and it was 10:30pm!
Scenic drive
We headed back to the city to a hotel called "Siji". In the morning we had a sumptuous complimentary buffet breakfasst - i even tried a couple of fruits whose name I don't remember! We played in the bowling alley for a while - for my nephew it was the first time and he was excited about it. We had lunch outside and then checked-out of the hotel. In the reception there was some type of black coffee kept; some form of Arabic black coffee which tasted very odd; my bro-in-law liked it but none of us did. We went to an archaeological museum (be
side the Fujairah fort) and most of the items were jewellery! Really, most of the artifacts were rings and bracelets! My nephew practiced using the camera by clicking at every artifact that was on display. 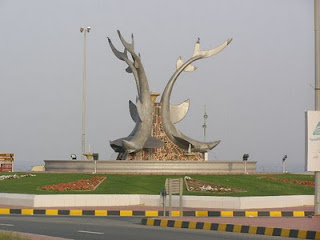 As we went further down the Hilton road, we noticed that the structure we saw at night was the Bidiya mosque - the road didn't seem too scary now! It fact it looked beautiful in the day. From Fujairah you head to Khor Fakkan and Dibba Al Fujairah. We went on a boat ride in the beach and then played in the sand making castles. The city had statues on every roundabout and there were plenty of roundabouts! Fujairah is one of the seven Emirates that form the UAE (an Emirate is a main city) and its surroundings are filled with rocky mountain ranges instead of deserts. It was a 2 hour drive back home in the midst of the desert sunset and plenty of transmission lines. 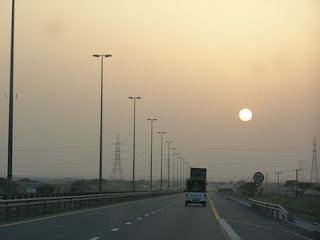 We ended the day with a game of monopoly at home - my nephew said before the start of the game itself that I would win and that is exactly what happened! Fun weekend but tiring for my bro-in-law with so much of driving; the only good thing is that you can take advantage of cruise control available in the Pajaero in the highways; by setting cruise control, the vehicle will travel at a constant speed and you don't need to keep the accelerator pressed. Very soon maybe no drivers are needed!
Posted by Unknown at 11:29 AM

Am sure your blog will be popular in 2012