It was pretty chill but since there were no seats inside we were forced to sit out. Sipping hot coffee in this weather was perfect. We found it amusing that Dunkin Donuts had chained all the tables and chairs that they had outside the store – in the US you kind of get accustomed to trust that it kind of felt odd seeing that. We picked a few free newspapers and headed to our next stop – we didn’t have much of a choice; the two museums on our list would close soon and then only thing left was Prudential Center or heading back home. The bus was at around 7 and we had a little over an hour left.

Back on the metro, we changed from the red line to the green line. The green line trains were small – just 4 carriages while the red line was pretty long. The switch over station (station where you get out of one line and take the other line) was very crowded – and the green line had multiple routes; there was a A, B, C, D and E route! Figuring out on which platform ours would come took a while - we went up and down a couple of times on the staircase and then discovered that since the green line was a small train, on each platform in different locations 2 routes of the green line would arrive.

We stepped out into the Prudential metro station which connected to the Prudential Center – a 50 storey skyscraper that had a shopping mall and office space. On the 50th storey, just like they have in many skyscrapers around the world, there was an observatory. The ticket is a bit pricey – $13 just to see the city from the top. But since this was part of the City Pass that we had, better to use it than waste it. And my friend hasn’t seen the view from a skyscraper – so seeing it once is certainly worth it. Just inside the building, in the ground floor, there were a series of telephone booths; we had to inform another colleague that we would be taking the 7pm bus. After dropping coins, my friend dialed the number but it went to an automated machine that said this would be placed as a collect call. Uh – this was probably the first time that we actually missed having a mobile! No mobile, driving without gps and hardly any access to personal emails – we were kind of going backwards!

Brahmins in the US?

We went up to floor number 50 for the 'sky walk observatory'; the lift shot up in a matter of a few 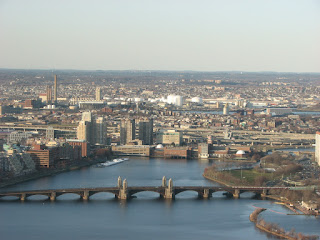 seconds. All these sky scrapers have really fast lifts. Imagine taking a minute to reach the top! The place wasn’t crowded. This observatory wasn’t just about the view from the top; it also had information regarding the early immigrants to USA – Boston was one of the common entry points for outsiders. There were nice paintings/posters on the walls and in rooms explaining the history of immigration – from the days in 1800s when people would land on ships from other continents to the present day where it could take years to become a US citizen. People who are not citizens are called “aliens” – a weird term to use; how many aliens do you have in your country?! Did you know that there were Brahmins in Boston? Not Indians but Boston Brahmins – they were the elite wealthy class in Boston and they were worried about the influx of immigrants. 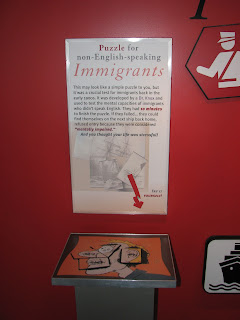 We could see the entire city through the glass windows – the sea, the bridge, the traffic and the vehicles that appeared like toys on the street. The famous Fenway park was also visible (the home ground of the Boston baseball Red Sox team). But for me the best part in this observatory was an amusing poster. Back in those days you could just land in the US and become an immigrant if you satisfied some basic criteria. You needed a way to quickly evaluate whether a person can aid in the development of your country – so a puzzle was developed; those who solved it were assumed to be fit for immigrating to the US! Wondering what sort of a puzzle that was? Check out the image on the side (click on it to see it enlarged) – it’s basically a kind of jigsaw puzzle to piece up! You could solve it within a couple of minutes but if your life depends on it then it might not seem all that simple – under pressure things can look complicated!

There was a sign at the entrance to the observatory which directed us to a phone booth. We dropped four quarters (if you plan on using the public booths then ensure you have plenty of quarters – 25 cent coins; local is 50 cents and long distance $1), picked up the receiver and found it dead! Well – there was no dial tone and I went over to check with the lady at the observatory reception; she came over and checked and couldn’t help us. It seemed like if we wanted to make a local call then she’d give her phone; but since it was long distance she didn’t! And thus the machine ate our $1. I reread the instruction and it said, “Pick the receiver and when you hear the dial tone, dial the number you want to reach.” Uh, our fault – you dial first and then put the money; not put the money and then dial! Trying this out in the phone on the ground floor (the one we tried the first time unsuccessfully), worked. We made our first call from a public booth!
Posted by Unknown at 8:03 AM