Part 7 – Too late to regret

(based on suggestion from Ankita we will try to add relevant snaps to the travelogue; hope you enjoy it)

I was quite hungry and so was Viswa. We bought a Tiger biscuit pack and a bottle of water.
“Oh, they make special Tiger biscuits with coconut added here”
“Yes; coconut added to everything”
It tasted different but in the hunger I didn’t mind the difference. Before entering the van, I spotted a beautiful bird on a tree top. I used the maximum zoom possible to capture it. After four attempts I got one where the bird was in the frame. Vasanth tried next to capture a better snap of the bird – it was a matter of keeping your hand steady. He also captured one nice picture. Praveen saw both of us trying to photograph something and he also wanted to try his hand at it. We were trying the patience of the guys inside the van!

According to the original plan we thought that from 1pm to 3 or 4pm maximum we would be in the caves and after that would have ample time to go to a waterfall. We had grossly underestimated and it was now 5:30pm. Next stop was Meenmutty waterfalls – we weren’t sure if it would be open but there was nothing else we could visit and so we thought of checking it out.

On the way Jabradamus, our trip coordinator asked, “We can decide on the plan for tomorrow”.
“How many want to go trekking tomorrow?”
The original plan was that we would go on a trekking trip tomorrow – on some actual trekking spot. Today’s trekking above the caves was not part of any trekking route.
“We did trekking today; why do it again tomorrow?”
“I’m asking because few of us went all the way but others didn’t. So if they want then we can go tomorrow for trekking”
“Na no need”
And so the trekking idea was dropped. There was a reserve forest to which we could go early morning and there was another sun rise valley we could visit.
“What to do in a reserve forest? There will be nothing”
“There is a jeep trip for 1.5 hours”
“It might turn out that we see no animals as well”
“But for all that we should start by 6am or so”
“Time is not a problem”
“The only problem is the guys there”, someone said pointing at Vasanth and Barath.
“Oh no problem you can just lift us and bring us to the van!”
“Or you go to the reserve forest and then come back and wake us up” 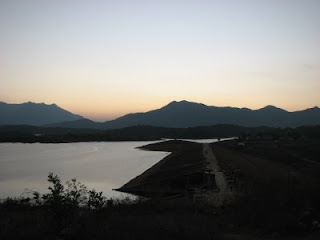 Meenmutty falls was closed – no more visitors allowed for the day. And so the next stop and last stop for today was Karapuzha dam. As we headed towards the dam, it was sunset time and the skies looked beautiful in the orange hue. If we had reached the dam 10 minutes earlier we could have had a perfect view of the sun setting with mountains on either side and still waters in front – it would have made for a beautiful picture. There wasn’t much to see in the dam – it is just still waters and a barrier. Praveen, Vasanth and I were experimenting with the night photography setting on my camera while the others were having a dip in the water. I reminded myself – no water! There was no staff around but plenty of tourists kept pouring in. People just walked the 500 meters stretch of land close to the water and returned back. As darkness set in we moved out from the dam.

The return trip back to our hotel was fun; Santanu started singing – he had a beautiful voice and sang well. He started with a couple of Hindi songs but on demand he switched to Tamil with Vaaranam Aayiram songs; Vasanth and KY provided the chorus support. Typically in such situations you never sing a complete song – you tend to keep jumping songs after a couple of verses. And so it went on for about 30 minutes or so along with pulling someone’s leg! I was reliving the trekking trip; I still couldn’t believe we had climbed it and returned in one piece!
“You guys should have come up – at least KY and Prabhu. It was awesome”
“Ya, should have”
Oh, well; it was too late to regret. They’d have to wait another day to live that experience.

heyy ss....thank for the pix. it is a lovely one :)
again....loved to read the travelogue!