It was around 9am when we were at the Kuruva islands entrance. First thing we did was enquire about lunch; there was only one restaurant it seemed (not exactly a restaurant – it was a thatched roof house). The guys told we would be back for lunch there. Kuruva islands would take 2 to 3 hours to cover depending on how much we roamed about. Jabradamus and I talked to the forest ranger near the main gate and got boating tickets. He told there are numerous small islands that we can visit.

Kuruva islands was separated from the mainland by a small stretch of water and there were two 10-seater boats to take us across. The oarsman were forest staff. On the other side we had a path leading us to the entrance of Kuruva islands. We took a few snaps on the way to the entrance; there were many tall trees on the way and I was misled by a few dried leaves into believing that there was a bird amongst the branches! The strange part was that there wasn’t much movement to be seen – no birds and no small animals around in an area that was like a forest; very odd.

We bought the tickets for entry; you could pay an extra Rs. 100 to get a forest ranger to guide you through the islands but we felt we could manage on our own. As we walked along we took numerous snaps – on bamboo chairs, on tree trunks that were tilted, on tree stumps, on branches and what not.
“Karthik; too much”
“Every time after taking a snap he will check the preview to see how he looks”
“Not just that; he will zoom in to see if he looks perfect!”
We took turns in photography. But the more we walked the more surprised I was that there were no animals around.
“So where are the little islands?”
“There they are”
“Those are just some large rocks in the water”
“They also constitute an island!” 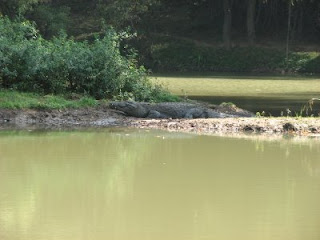 Suddenly there was a forest ranger pointing towards the water; a few people and all of us rushed to see what it was. Viswa who was having my camera exclaimed, “See this”. He had captured a snap of an alligator coming out of the water – it returned back to the water immediately.
“They say that crocodiles and alligators are attracted even by a drop of blood in the vicinity”
“We have Kumar here – he has plenty of extra blood; one drop is not an issue”

We ambled along and came to a pit which had a tree trunk lying across it – you could either step down the pit and climb up the other side or walk on the tree trunk to get to the other side. The pit wasn’t very deep but standing on the trunk did feel uneasy. The guys below were doing photography and asked us to position ourselves better on the trunk. I walked midway on the trunk and then stopped; even if I lost balance I could jump safely into the pit but my legs quivered. At this point the guys below asked me to move a little in front so that they could get a better snap! I had balance but there was a very visible trembling below my knees.
“Hey, you legs are really jittery” Jabradamus shouted from below.
As soon as the photo session was over I darted across back to safe turf. There wasn’t much out here; the area was perhaps good for a picnic spot but there didn’t seem to be anything else of interest. I still didn’t find any bird in the area!

We soon came across a stream and only now did I understand what they meant by small islands. There was a main water body that was separated in many areas by pieces of land leading to the formation of many small islands. The guys decided to cross the stream while Vasanth argued, “What is the point? We will have to come back this side again to exit”.
Posted by Unknown at 10:54 PM