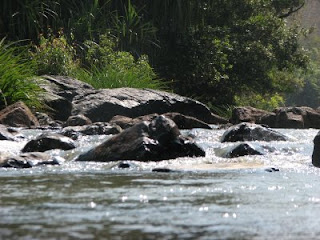 The stream had a few rocks in between that formed a broken path to the other side. There was no other way to the other side other than crossing this stream. There were a few other people as well in the area who were dipping their legs into the stream. The forest ranger in the area said that we can cross the stream.
“Go quickly guys; the crocodile is not too far off”
I wondered how the rangers were encouraging people to cross the water stream when we had seen a crocodile in the water some distance away.
The guys began crossing the river.
“Remove your shoes – it is very slippery and shoes will get soaked in water”

I reluctantly removed my shoes and stepped on the stones. Watery stones are really slippery but I felt that I felt more slippery without shoes! Having my shoes in one hand and camera cover on my shoulder I gingerly stepped on the stones. Viswa was in front of me with my camera on his shoulder. The rocks were mostly within water with just their top projecting above the water level. The water was flowing at a fair pace.

With us three-fourths of the way through I stepped on a stone, slipped and fell. There was nothing really to grip on to and one of my shoes floated away. The other shoe I threw over to the other side where the guys were standing. Fortunately the stream wasn’t deep and you could wade through the water which was only upto waist level. Perhaps I could have waded through the water instead of taking the slippery stones!
“SS, do you need a hand”
“It’s okay Viswa, will manage”

As I got up, he slipped on the next rock and fell! He managed to grip on to something and didn’t fall that bad. The camera also didn’t touch the water. When I reached the other side I examined my leg. I had a wound on the left leg, between the knee and the ankle and some scratches and minor bruises on my feet. The main wounded area had become swollen and first thought was what my mother used to say ‘swelling indicates a fracture’. The bleeding had stopped; my shoes and socks were wet and I couldn’t put them back on over the injury. Guys examined my wound while I wrung the socks. I walked barefoot along with the group and we faced another water body. This had still water and we waded through the water; we trusted the depth of the water bed.
“Jabradamus, we can now test our theory about crocodiles. A few drops of my blood will be there in this water – let’s see if it comes over!” 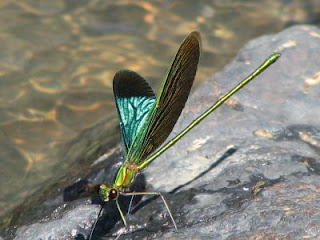 I didn’t go much further; crossed another still stream and found an area which was basking in sunlight. I put my socks on a tree trunk for drying; Jabradamus also stayed back to give me company. He did some photography and pulled out a very beautiful snap.

Ten minutes later the others returned and we were all heading back. We again had to cross the moving stream but this time few of us waded through the water rather than taking the stones. We would feel with one foot, test the next step and only then move on. Some of the guys felt secure walking on stones than with their knees under water and took the same path we came by. I came over to the other side and tried to take snaps of the worried expressions on those who were returning – worried about whether something nasty might happen on the next step.

KY put on my shoes while I put on his slippers and we waked back. The swelling on my leg had subsided but it still hurt when I touched near the injury. The return was quicker because we didn’t stop for any photographs. In 15 minutes we were back on the boat heading back to the entrance.
Posted by Unknown at 2:06 PM