For a while we were lost in the irony of life – serious love and flirtatious love. But like everything else in life, you have to move on and so did we. KY switched topic back to travel – a favourite for him and me. The target was Prabhu who had recently been on a 3 week tour to Europe with his family as part of a tour package. KY kept questioning and probing and I added a few questions as the conversation proceeded.

You would remember that we came a long way uphill to get to Wayanad and now it was a rapid downhill ride. And on rapid descents some people get nausea.
Jabradamus revealed why he was occupying the front seat thoughout the trip – easy access to the window!
The feeling was contagious – Barath was the first affected by it and then others also jumped into the nausea bandwagon. YK, Prabhu and me were not affected by the nausea effect. I soon switched into the last seat beside KY to listen to Prabhu’s stories.

The train ride was really short with us waking up at around 4am to get down at Cochin. We then went to the BSNL guesthouse that Sachin had booked for us and we dived into bed to catch some sleep. The guest house was luxurious with ample space and all facilities – tv, ac, cosy comfortable beds, thick blankets, spacious bathroom with heater.

Morning we set off for the marriage at the church. With the entire proceedings happening in Malayalam it was tough for us to follow what the priests said. There were also a few hymns in Malayalam. There were some things that we understood – “You both agree to stay together in times of wealth and penury, good and ill health, times happy and 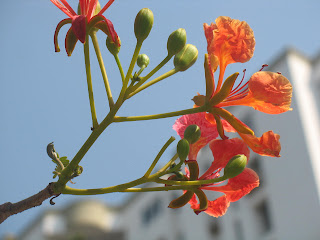 sad”. That was a nice sentence – being together in every situation.

Lunch was sumptuous but the only problem was that we had a lot of time for our train which was at 7:30 or so. The time was 2:30 and one suggestion was to hop for some movie. But which one – either we had to go for Twenty Twenty (Malayalam) or Villu (Tamil). We knew that 20-20 was a good movie but weren’t sure of the Vijay starrer Villu; his movies were just not up to the mark these days. The scripts he picked were on a downslide from what everyone else said because I hadn’t watched any of his last few movies.
Prabhu was keen on Villu.
“Oh, he wants to go because of the heroine”
Vasanth on the other hand wanted to sleep!
“You can sleep in the film!”
Finally it was decided that we will check out the theatre timings and then take a call on whether it was movie or something else. The afternoon heat definitely didn’t encourage us to roam around the city as well. The theatre was close to the BSNL guest house and so we could surely go for a 3pm show if there was one. It was quite a comedy in the bus ride with us thinking that we had gone way beyond our point and no one able to communicate clearly with the conductor.
The confusion arose when people say boards that said, “Hey, we are in Ernakulam. We have crossed Cochin itself”.
We later realized that the bus had taken a circuitous route and we were still on the right track.

The show timing was perfect and since there was only minor support 20-20 Villu it was decided.
“Jabradamus’ second Tamil movie in theatre!”
The first one he went for was by accident; or rather being setup unknowingly. He thought we would go for an English movie but at the theatre the others bought tickets for a Tamil movie!

Since we had enough time for the movie to start, around 45 minutes or so, we took a walk towards marine drive. The heat was terrible and we had to abort the walk – we sat near the shore watching a few boats racing away on the waters.
“We could have go 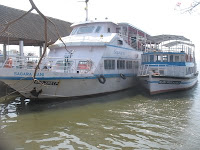 The film was an out an out comedy in the wrong sense. The humor was wry and I wondered why most of the times in our films the humor had to be in the physical sense. We just couldn’t believe what they had attempted to dish out.
“And they were advertising this as some James Bond movie”
“The heroine is there for nothing meaningful – just for the glamour and nothing else”
“Wonder why they aren’t able to write a better script. They spend so much money and it is kind of ridiculous the way the plot is”
“It is actually a copy of the old hindi film Soldier”
“Oh”

When we reached back to our room we enquired and found that all seats except 1 were still in waiting list. And since it was a e-ticket on waiting list it would get cancelled. So that meant 1 reserved and 8 on waiting list – perfect!
I went over to the other room to announce the good news, “Great news guys – we have 8 still in waiting list – numbers 1 to 8 in the waiting list. Jabradamus got his confirmed!”
And then we evaluated our options – any other train or bus options possible.
The debate raged on at the railway station – I was worried about my leg; there was what seemed to be a different swelling and pain on my foot. I put some cotton and band aid to cushion the wound.

A couple of guys decided to take the bus; they didn’t want to travel by unreserved coach. The rest of us got unreserved tickets but I realized that it is better to take tickets individually than having all in one – because then whoever wants to go can go and needn’t be dependent on the group. It creates unwanted c 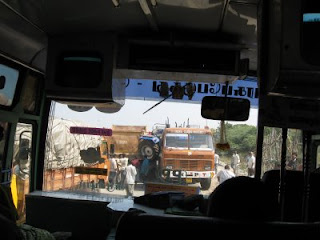 omplications and in the end I was part of the group that went for the bus ride. And what a ride it was – one stop in between. We started at around 8pm and reached Chennai at 3pm! The unreserved travellers got a place to sit after an hour. There was a comical traffic jam we witnessed – on a narrow stretch of the main road, a tractor was stuck in between a large truck and the back of another vehicle. The truck was carrying the tractor, and somehow it got displaced from the back and as it slipped sideways jammed on to the truck which was coming in the opposite direction. Traffic came to a standstill for 40 minutes.

Long bus rides have their effect on the body and I had a swollen foot as a result of the ride; it was a bit frightening because it was my injured foot that was swollen. Doctor said it was less likely to be a fracture and I had to get a tetanus injection and stop tennis for a while till the pain disappeared.
Posted by Unknown at 9:50 PM

Your blog keeps getting better and better! Your older articles are not as good as newer ones you have a lot more creativity and originality now. Keep it up!
And according to this article, I totally agree with your opinion, but only this time! :)

You have to express more your opinion to attract more readers, because just a video or plain text without any personal approach is not that valuable. But it is just form my point of view

Your writings are simply amazing. Keep it up. Hoping for more write ups.