Part 12 – We don’t market ourselves well


YK did look a bit odd in my large sports shoes, without socks and with a colourful shirt. In some ways he reminded me of captain Haddock! We had lunch in the place we had ordered but to our shock the owner of that hut said each meal costs Rs.35. He justified the higher price sayin that it was due to the plain rice he prepared specially for us; if we had asked for normal Kerela rice it would have cost only Rs.20! Huh – so, moral of the story is go for the local food rather than something different to experience the feel of travel and also to keep it cheap!
Next stop was another dam Banasura Sagar dam (Earth dam; supposed to be among the largest earth dams in Asia).
“Speed boats will have 2 hours waiting time”
“Oh; so that is ruled out then”
We bought entrance tickets and went in.
“So what else would be there?”
“We’ll just see the speed boats and come”
“What are speed boats?”
“Must be motor boats only – the ones they use in races, probably that variety”
For the entrance ticket they gave us a nicely printed card that could be used as a postcard. It had a lucky draw coupon on one end as well.And off we started on a walk – there was a nice long road and we walked it with no idea as to what we would see. There was still waters on the left and the road just seemed to keep on going.

“I don’t see anything around here”
“It is just a dam – so there won’t be anything”
“We’ll see what the speed boats are; at least get a glimpse of them and return”
“You’ve noticed one thing – we people just don’t seem good at making money out of tourism”
“Hmm”
“This same place in US or Europe would have had a souvenir shop with books about the dam, special photo shots, some helicopter ride and what not”
“We don’t market it properly”
“There is absolutely no staff around to tell what this place is all about”
“SS, it will be good to start some tourist company. Where we get the best hotel rates for people, provide accurate information regarding the tourist places – make it like unravelling a mystery for them. Showcase our actual heritage and culture along with explanations so that they can appreciate it”
“Really, that would be good”
To me it felt as if India isn’t making the amount of money it could actually make out of tourism. There were numerous sightseeing spots all over the country and each place could have provided a lot of opportunities for employment to people.
After 20 minutes of walking, I was actually limping a bit with my wounded leg. “There’s the boat”. And finally we saw the speed boat. It was nothing but a motor boa 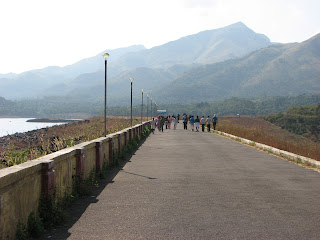 t – like the ones they use in racing competitions. There was a little park with a few swings and one juice shop at the end of the road. We had a drink, sat for sometime there and then walked all the way back to the entrance.
“Anyone has a pen” Karthik asked.
I gave him mine and he began filling up the lucky draw coupon that was attached to the entrance ticket.
“Who knows I might win”

“He is dreaming that he will win a honeymoon trip”

“He will win a trip to Wayanad with free stay in the same hotel” we all joked.

The last stop for today before we returned to the railway station was Soochipara falls. Guys slept off and I went around clicking snaps. I tried to capture rays of sunlight by changing the camera settings and it wasn’t long before my camera whined “Batteries low” and shutdown! So much for photography experimentation. At around 5pm we reached the waterfalls entrance. Again there was quite a way to go before we actually reached the waterfalls. Since time was running out we took a jeep and all of us crammed into that one jeep. I was the last one to enter and was literally lying on top of everyone else with my leg dangling outside the jeep! The driver raced downhill at breakneck speed.

Climbing down a lot of steps got us to the waterfalls. Vasanth and I stayed on top while the rest of the gang went towards the base of the waterfalls. Vasanth was saying, “I don’t like trips with a lot of walking around to do and all”“You prefer just visiting spots and moving on”“Ya, don’t like to trek and all”Each person had a different way of enjoying travel – some liked the adventure while some liked it calm. 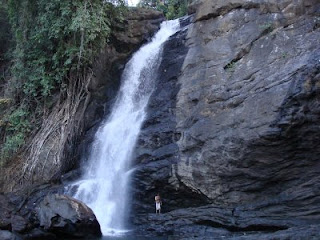 Not everyone went into the falls to have a bath. Vasanth and I clicked snaps on the cameras we had. There were a lot of other people as well. After a while a group of college students came in and it was around 6:30pm when we started walking upwards. No jeeps were available and we had to walk all the way up! I was terribly hungry and bought some chips, biscuits and juice to carry along on our trip back to the railway station. Around 7pm we were on our way heading towards the railway station – a three hours ride that opened up an interesting topic of discussion.
Posted by Unknown at 2:05 PM